The Nouveau Chai is the first visible new building for over 200 years on the expansive estate, which is located in Bordeaux's Médoc region – one of France's important red-wine terroirs – and dates back to at least the 12th century.

Rather than opting for a contemporary design, London-based Foster + Partners chose to create a fusion of styles. As such, the winery combines walls of glazing with traditional details including a shallow-pitched clay-tile roof.

Twelve steel columns – six on each side – support this roof, with branching forms that mimic nearby trees.

"As a lover of wine there is only one Château Margaux – it is a hallowed label," explained architect and studio founder Norman Foster, whose previous projects include a building for Spain's Bodega Portia winery.

"This design has been inspired by the character of the existing estate, and what [architect and writer] Bernard Rudofsky called 'architecture without architects' – the vernacular architecture that embraces everything from windmills to bridges, and the wonderful heritage of the big barn," he explained. 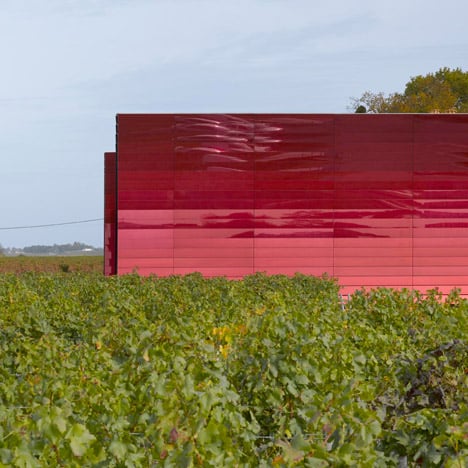 "I have been fascinated by this anonymous tradition since my student days."

The building's roof mimics the proportions of its neighbours, creating large eaves that form a generous canopy around the outside of the walls.

The tiles that clad its surface were sourced from ruined structures elsewhere on the site.

"I was inspired by a communal lunch in the open space under the great roof of one of the structures during the grape harvesting," said Foster.

"By investigating ruins elsewhere on the site it was possible to recycle enough tiles to create another major roof in the same vernacular."

Most of the estate's existing buildings was constructed in 1812, to a First Empire-style design by leading Bordeaux architect Louis Combes. The Nouveau Chai extends from the eastern wing of the complex, creating a new facility for the production of both red and white wine.

Inside, a double-height space creates the necessary room for large metal barrels, while a mezzanine floor creates a space for tasting.

"The new winery is rooted in the technology of today and the best of these traditions – it is 'of the place' in both the culture of the local architecture and the industry of wine making," said Foster.

"In the overall picture of the Margaux Estate this approach ensures that the original Chateau of 1815 remains the architectural protagonist. At first glance there does not appear to be a new building. This is deliberate and it is only on closer inspection that the new addition is revealed."

As well as the new winery, Foster + Partners created a subterranean storage area known as the Vinothèque. Concrete walls help to regulate temperature in the 70-metre-long floor-protected space, which houses a collection of celebrated Château Margaux bottles.

The creation of these two new facilities has also freed up space in the existing buildings, which are now exclusively dedicated to the production of red wine.

The cooperage – where barrels are made – has been relocated, while the visitor walkway to the existing 200-year-old cellars has been refurbished and the former vinothèque has become a barrel store.

The final interventions were the redesign of the central courtyard, allowing it to accommodate equipment during harvest season, and the restoration of a 640-square-metre orangery, understood to be the oldest structure still standing on the estate.

According to the design team, the aim was to restore its original character. This involved opening up a large south-facing window to create a light-filled winter garden, providing a flexible space for outdoor events.

Foster is one of a number of high-profile architects to have worked on wineries over the last decade. His friend and former colleague Richard Rogers completed the Bodegas Protos winery in Spain in 2008, while Jean Nouvel recently extended the Château La Dominique winery in France's Saint-Émilion region.

Photography is by Nigel Young/Foster + Partners.