Penadés wanted to come up with a new way to recycle leather after becoming aware of the amount of leftover material from the car, fashion, shoe and furniture industries.

"I found leather especially interesting because it's the first material in history that humans have used," he told Dezeen. "But what really shocked me was the lack of well-established recycling processes."

After extensive research, Penadés came across a process that involved shredding leather and then combining it with resin to create a reconstituted material.

"I couldn't believe that the only way we are recycling leather is with resin, because in the end you are doing more harm then help," the designer explained. In response, he opted to use animal bone glue as a binder.

"The bones are a by-product of meat, and are boiled in a bain-marie for a certain amount of time and at a certain temperature," he explained. "As the water evaporates, you're left with this kind of stone which is then smashed and reveals the glue."

Penadés first turned the leather into strips by feeding sheets of the material through an office-style paper shredder.

After adding the strips to the glue, the mixture is transferred into iron moulds and compressed, then left to set. 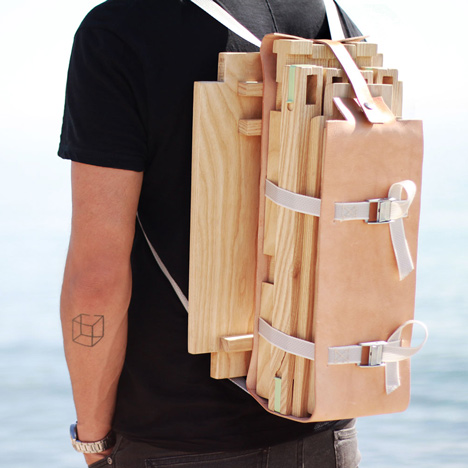 When solidified, the top layer of the leather is shaved to reveal the marble-like patterns created by the strips.

"To finish the material, I used shellac which is a natural resin that comes from an insect," he explained. "After this it's like wood and I can cut it and sand it. The fibres of the leather give it a slightly flexible quality, but it's pretty stiff."

Each piece is then fixed together and circular brass plates are added to turn the structures into functional tables.

Seeing the potential of the material across many industries, Penadés believes the process could be used for creating flooring, tiles and shoe soles.

"I'm really looking forward to doing a collaboration with a company, because then the story gets completed," he told Dezeen. "Now I'm just making gallery pieces and not really benefitting anybody."

The project, entitled Structural Skin, was on show as part of the Ventura Lambrate design district in Milan this April, with more developed pieces on display at the DMY Berlin festival that concluded 14 June 2015.

Dutch designer Pepe Heykoop previously responded to the amount of waste created within the leather industry by using odd scraps to upholster existing furniture, while School of Arts Utrecht graduate Vera Knoot has developed a new type of leather from the skin of geese culled in the Netherlands.