A network of columns and arches frame this toy shop and cafe inside a retail development in Beijing, referencing the mascot for the shopping centre – a dandelion seedling named Toby (+ movie).

Using this mascot as a starting point, Beijing- and Vienna-based Penda created a space filled with curving columns – each representing one of the individual seeds that makes up a dandelion plant.

The column represents the stem, while the curving parts towards the top represent the parachute of tiny filaments that help to disperse the airborne seed.

Named Toby's Home, the shop is located within a shopping centre in a commercial development called FunMix in Beijing's Daxing district – an area that will eventually become the home of the world's largest airport terminal, designed by Zaha Hadid.

The shop sells figurines of Toby and his friends, who are characters dreamed up by Chinese developer Vanke – the same company behind Daniel Libeskind's dragon-inspired Milan Expo pavilion and Steven Holl's "horizontal skyscraper".

"We were asked by Chinese developer Vanke to create an architectural interpretation of Toby's environment and translate it to a space for children and grown-ups, combining a toy-store with a cafe and public areas for lectures or games," explained architect Chris Precht, who co-founded Penda along with Dayong Sun.

"We were looking at the project the same way as a seedling might see our natural environment and translated trees into large arches, which bundle together and define different areas within the space," he added.

The white columns are dotted throughout the 4.5-metre-high space. They each curve outwards as they near the ceiling, allowing them to link up with neighbouring columns and form arches. 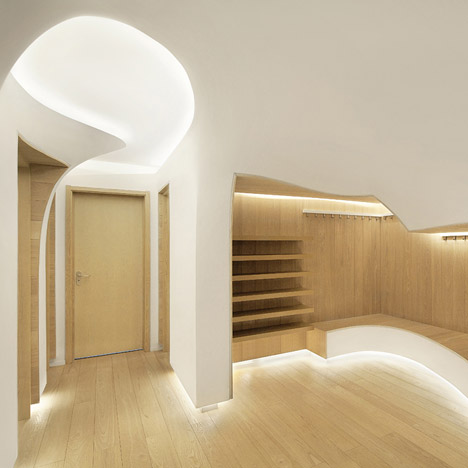 Precht – whose previous designs include a portable bamboo hotel – described them as "elegant and glittering dandelion seeds".

The latticed structure that supports the arching columns creates shelving for displaying Toby dolls, as well as plants, books and other products.

LEDs set into the tops of the branching structures light the space, while a curving window inserted below one of the arches forms the shopfront.

"Like a forest, the space offers a great contrast of solid and light, closed and open, dense and wide areas, resulting in an interesting atmosphere of spaces and light," said Precht.

"As visitors walk into the 800-square-metre space, they are greeted by bundles of arches, which are kept solid to the front," he added.

"As the visitors continue to get deeper into the forest, the arches open up for them to look through and products to be displayed."

Sloping walkways and staircases are hung from the ceiling by rows of white painted steel cables, leading up to a mezzanine level above the shop floor.

This elevated platform is described as a clearing-like space within the forest of columns, which can be used for events, games or lectures.

A coffee shop tucked below the mezzanine can also double as an exhibition space when furnishings are removed.