The Royal Institute of British Architects in London has revealed 37 winners of its 2015 awards, including a shoe-polish factory converted into offices, a sculptural swimming pool and a waterside distillery (+ slideshow).

The RIBA Awards have been changed this year to only recognise projects in the UK, and this year's list of winners comprises 29 in England, five in Scotland, two from Northern Ireland and one in Wales. 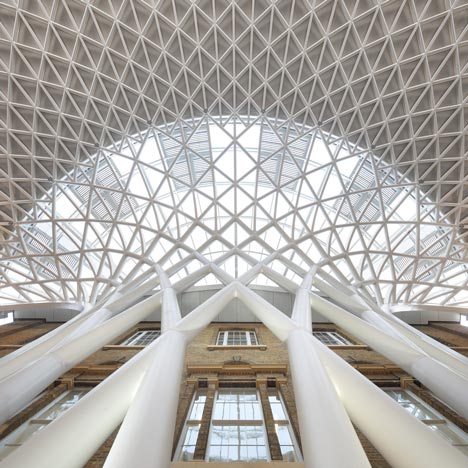 There are also seven education buildings, including a nursery school in Edinburgh by Malcolm Fraser Architects, Heneghan Peng's library for the University of Greenwich and Feilden Clegg Bradley's student union for Manchester Metropolitan University.

"The UK is blighted by poor-quality new housing and dilapidated school buildings, so I am delighted that the notable trends amongst this year's RIBA National Award-winners are the volume of inspiring new housing and education projects," said RIBA President Stephen Hodder.

"I am particularly pleased to award an unprecedented number of housing developments," he continued. "The innovative spirit of these projects sets them apart from the ubiquitous, uninspiring housing developments being built all over the country. Our award winners show it is possible to build exceptional new housing developments that are profitable, sustainable and desirable places to live."

He went to explain how he believes well-designed school buildings have the power to inspire students and teachers.

"This doesn't mean every new school needs to be a show-stopper, but we must ensure that value for money and the best possible design go hand in hand," he said.

The shortlist for the Stirling Prize, awarded by the RIBA to the most significant contribution to British architecture this year, will be drawn from these winners and announced on 16 July 2015. Last year's recipient was the Everyman Theatre in Liverpool by Haworth Tompkins.