Format Elf Architekten has disguised a three-storey family home as a two-storey building by incorporating both upper floors within a large asymmetrically pitched roof (+ slideshow).

The Bavarian architecture studio designed House B for a small plot on the outskirts of Munich.

The pitched roof is the dominant feature of the house, designed to maximise the amount of living space on the limited plot by containing the building's two upper floors.

The uneven angles of the pitch were determined by taking into account the required setback distances from an adjacent road and neighbouring houses. 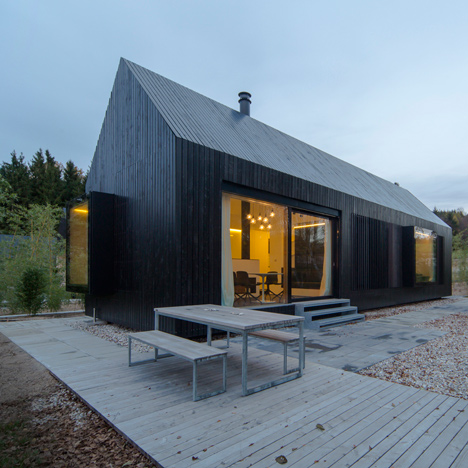 "The challenge was to keep the free spaces that were required by the public construction authority," studio co-founders Robert Maier and Stefan Hanninger told Dezeen. "The restrictions reduced the available space to one third."

"The roof pitches, which were determined mathematically according to the yard and setback regulations, have been implemented innovatively in the form of an asymmetrical roof in order to create maximum living space on the small plot," they added.

A lounge and study area are both slotted beneath the pitched roof on the uppermost floor, while bedrooms and bathrooms are located on the level below. An open-plan dining area and kitchen occupy the ground floor of the property.

Both recessed and protruding windows puncture the street-facing facade, while larger expanses of glazing were added on the garden side. This allows plenty of light in to the building, but also maintains residents' privacy.

The two rear corners of the house – where the living room and kitchen are positioned – are entirely glazed, while a skylight set into one of the roof's slopes provides additional lighting for the upper-floor lounge.

The house has a timber frame, which facilitated a short construction time of just six months. The underside of the timber floors has been left exposed to create wooden ceilings for rooms on the ground and first floor.

The architects also created furnishings for the 250-square-metre property. Taking their design cues from the house's timber frame, they integrated two black wooden units to separate the living room and kitchen from the stairwell.

The timber furnishings are paired with white walls and white polyurethane floors, intended to give the illusion of greater space.

"The predominant colours and materials used on the building are reflected in the interior design," added the architects. "The white floor gives the room brightness and depth."

Format Elf Architekten, which is based in the Bavarian town of Töging am Inn, has previously created a trio of blackened-timber holiday cottages in the Bavarian countryside and an office featuring hexagonal perforations that give it the appearance of a matchbox.

Photography is by Cordula de Bloeme.