Creators of the proposed Lowline in New York, billed as the world's first underground park, have launched a Kickstarter campaign to help fund development of the project (+ slideshow).

"Our vision is a stunning underground park, providing a beautiful respite and a cultural attraction in one of the world's most dense urban environments," said the Lowline organisation, which is spearheading the project. The nonprofit organisation is led by Ramsey and Daniel Barasch, a former radio producer.

Money from the the Kickstarter campaign, which ends 8 July, would help fund technical development, along with a science laboratory that will be open to the public this autumn.

"A big piece of what we want to do is literally test out the solar technology [for the park]," Barasch told Dezeen. "We're looking at ways to do this very publicly, so people can come and see the technology up close."

"It's a bit of a challenge because it's a public design project," said Barasch. "I wish there were more Kickstarter projects like ours." 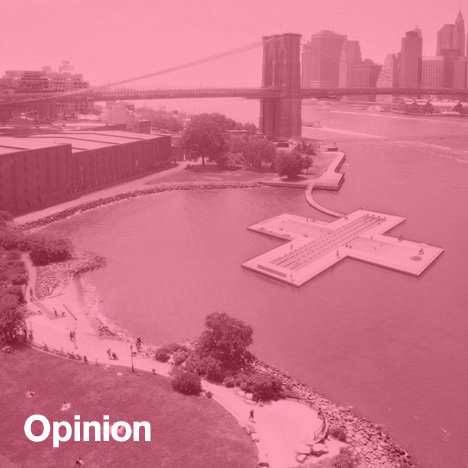 The Lowline project is backed by high-profile supporters, including Craigslist founder Craig Newmark, and actress Lena Dunham – who stars in a promotional film for the project.

To bring sunlight into the underground park, the designers have created a system in which light reflectors would be placed on surrounding buildings and rooftops.

These would direct light to an above-ground solar collector, which would then funnel the light downward through fiberoptic cables. The cables would connect to dome-shaped panels, which would distribute the natural light throughout the park.

"This technology would transmit the necessary wavelengths of light to support photosynthesis, enabling plants and trees to grow," explained the organisation. "During periods of sunlight, electricity would not be necessary to light the space."

Artificial light would illuminate the park when sunlight is not available.

To examine the project's feasibility, the Lowline organisation commissioned a planning study in 2012.

"The study concluded that the Lowline was not merely technically feasible, but would also vastly improve the local economy and the adjacent transit hub," said the organisation.

In September 2012, the Lowline team built a full-scale prototype of the technical system and staged a public exhibition, called Imagining the Lowline, in a warehouse above the park's proposed location.

The designers have been working with city officials to push the project forward since it was first announced in 2011. They recently had "an encouraging meeting" with chairman of the Metropolitan Transit Authority (MTA), which has jurisdiction over the site, said Barasch.

"After all this time, what we've been able to do is to get a clear indication that city wants this thing to happen," he said.

By the end of 2017, the group hopes to complete negotiations and launch a $60 million (£38.2 million) capital campaign to support construction of the park. If all goes as planned, the park could open in 2018.

Barasch said the High Line has been a key source of inspiration.

"It took them 10 years from the start of project to it actually opening it up," he said. "Over the years, there was a lot of resistance. It took a lot of time."

"We've really moved the needle not just on this project, but on the use of underground spaces around world," said Barasch of the Lowline project.

The actual design of the park is still in development. The group is working with Signe Nielsen, principal at landscape architecture firm Mathews Nielsen, on the landscaping scheme.

"There would likely be ivies, certainly some kind of cacti, and edible plants such as mustard greens and radicchio," said Barasch. "We're even looking at the possibility of strawberries."

Mosses and mushrooms will likely be incorporated into the scheme, as well. "There's not a lot of research on this," noted Barasch. "That's why we're so animated."

The site is just below Delancey Street, near the Manhattan Bridge. The now-empty terminal opened in 1908 for trolley passengers but was closed in 1948, when trolley service was discontinued. Ramsey first discovered the space in 2009 and began to conceive the underground park.

"Despite six decades of neglect, the space still retains some incredible features, like remnant cobblestones, crisscrossing rail tracks and vaulted ceilings," said the organisation. "This hidden historic site is located in one of the least green areas of New York City — presenting a unique opportunity to reclaim unused space for public good."

Stories about the High Line