A concrete canopy with circular rooflights has been suspended from the back wall of this house in Lithuania, contrasting with the building's timber exterior.

Named House in Vilnius, the residence was designed by local studio Aketuri Architektai for a couple with two children, who had travelled widely but wanted to create a base for the family in the Lithuanian capital.

The building occupies a sloping site that was formerly part of the neighbouring home's garden, in an upmarket suburb of the city.

"The house is designed with a humble form and expression in contrast to the prestigious area, where many homes are like mini castles from The Sopranos," architect Lukas Rekevičius told Dezeen.

The owners originally wanted a Provence-style house, with a stone exterior and classical columns, but the architects convinced them otherwise.

"We spoke with them a lot, questioning the sense of having a Provence style outside of Provence, and classical columns when we have already lived through the 19th century," said Rekevičius.

The two-storey design they agreed on, which has a footprint of approximately 150 square metres, was built with concrete and clad with Finnish ThermoWood – wood that is heat-treated to improve its durability and will turn a silvery-grey colour over time. 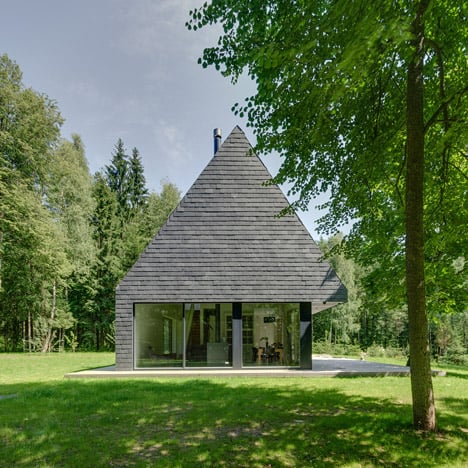 "The house stands in a special context, with old homes and pine trees, so the wooden exterior is like a graceful dance with the surroundings," said the architect.

At the back, a concrete canopy has been suspended from the rear wall to provide a shaded area on the terrace, with circular rooflights to lighten its appearance.

"We wanted to create a counterbalance with the timber, but we also wanted the canopy to feel like it was floating in the air, and create nice shadows," added Rekevičius.

Inside, the home's concrete structure was left exposed on the ceilings, but mosaic tiles and herringbone-patterned timber were used for the flooring to ameliorate its harshness.

"The interior reflects the nature of the owners – pure, wise, hard-working people who love quality things," said Rekevičius. "No material seemed better than concrete for this."

The ground floor has an open-plan dining room and living space that opens out to the rear terrace, and a separate kitchen-diner at the front near the entrance.

The first floor contains a master bedroom with a dressing room and en-suite bathroom, as well as three bedrooms for the children and guests, and two shower rooms with toilets.

Doors frames for the bedrooms extend up to the ceiling and feature glazed panels at the top, to both accentuate the height of the upper level and create a better flow of light throughout the circulation area.

"The glazing at the top of the doors is also a good way for the parents to tell whether the children are sleeping or not," said Rekevičius.

The design team also included Milda Rekevičienė and Alda Tilvikaitė, who both collaborated with Rekevičius on another house project at the same time – a shale-clad property in the lakeside region of Trakai.