Named Mirrored Gardens, the complex is an outpost of Vitamin Creative Space – a Guangzhou gallery that was first established in 2002. It comprises an exhibition gallery, art studios, visitor facilities and overnight accommodation.

Sou Fujimoto's design consists of a series of small cabin-like structures, interspersed among the existing trees. 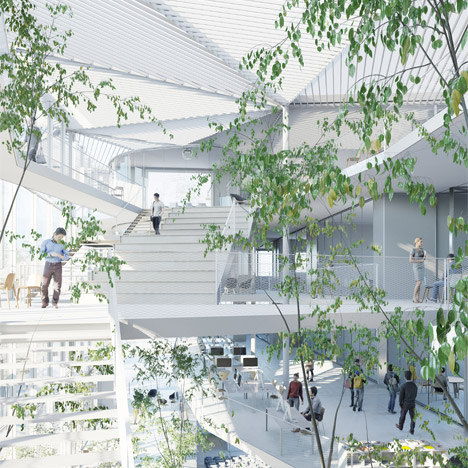 These structures are raised up on decked platforms, lessening their impact on the hilly terrain. They surround rock gardens, as well as a shallow pool framed by an elevated walkway.

"Inspired by the natural and traditional character of the surrounding villages, the project seeks to merge in its environment," said Sou Fujimoto's studio in a statement.

"In order to minimise the impact of the building on the site, the program is broken down into several small buildings that create a village like ensemble."

The site already contained an old warehouse – a remnant of the its former use as a farm. This structure was damaged beyond repair according to the architect, so it was dismantled and its grey brick walls and roof tiles were reused for the new buildings.

"The clients are strongly attached to its vernacular character and its perfect harmony with the abundant vegetation of site. Its presence thus played an important role in the final design," said the design team.

Most of the new buildings have a gabled profile, helping them look like little houses, but there are also rectilinear structures featuring large house-shaped windows.

Some are rendered white and one has a bright red exterior, contrasting with the grey tones of the reused brick. There is also a structure clad on one side with seashells, and a series of thatched canopies.

"The use of local materials, as well as the reuse of materials from the existing warehouse, contribute to integrate the project in the site," added the team.

Co-directed by Hu Fang and Zhang Wei, Vitamin Creative Space is considered to be one of the most prominent galleries on the Chinese art scene. One of its aims is to explore the relationship between contemporary life and ancient Chinese philosophy.

This new venue, which opened in February, is intended to prompt interactions between art and agriculture. So far it has hosted an exhibition of work by Hong Kong- and Taiwan-based artist Lee Kit and an installation of mirrors by Danish-Icelandic artist Olafur Eliasson.

Related content: see all our stories about Sou Fujimoto

Galleries feature poured concrete floors and clean white walls, while other spaces include a small bookshop and library, and a communal kitchen.

In a 2013 interview, Fujimoto – who designed that year's Serpentine Gallery Pavilion – told Dezeen that the relationship between architecture and nature was a "fundamental theme" in his work.

"I like to find something in between. Not only nature and architecture but also inside and outside," he said. "Every kind of definition has an in-between space. Especially if the definitions are two opposites, then the in-between space is more rich."

Among Fujimoto's best-known projects are the Musashino Art University Library and House NA. He has also recently completed a Miami shopping centre and a spindly bus stop in Austria.

Photography is by Zeng Han, apart from where otherwise indicated.