Bjarke Ingels' firm has won a competition to design a 185-metre-high skyscraper in Frankfurt, with a proposal it describes as both classical and sculptural (+ slideshow).

Less than a month after the firm ousted Foster + Partners from the Two World Trade Center project in New York, it has now been named winner in a contest to design a mixed-use tower in Frankfurt's downtown financial district.

The building is conceived by BIG as a simple rectilinear form with two sculptural interventions.

Floorplates will be shifted at both at the base and the centre of the tower to mark clear boundaries between the building's different functions, with sections dedicated to apartments, offices and public uses.

"By gently shifting the floorplates of the simple elegant volume, the tower incorporates all the elements of a real city: spaces for living and working, inside as well as outside," explained Ingels. 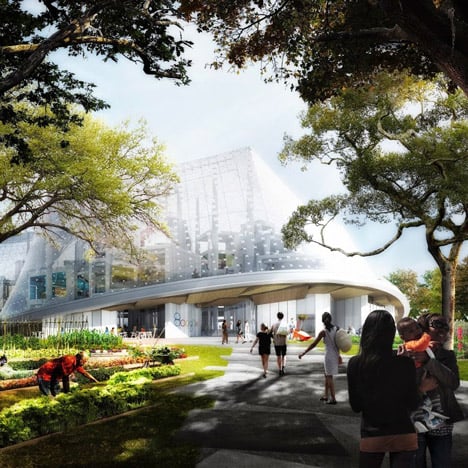 "The result is a striking new silhouette on Frankfurt's skyline that looks different purely because it performs differently," he said. "The shift at the hip will be a sign that new life has infiltrated the cluster of corporate headquarters in downtown Frankfurt."

Copenhagen- and New York-based BIG is partnering with Austrian engineering firm Bollinger + Grohmann on the project.

Their aim is to create a strong presence on the skyline, as well as a building that is welcoming at street level.

The office floors will be housed in the upper levels of the 65,000-square-metre tower, while residential floors will be located in the middle section, where the shifted floorplates will create generous terraces.

Public uses will be accommodated at the base, opening out onto a new public square.

"Our proposal for the new Metzler site embodies the unique character of Frankfurt, a city that has a unusual mix of high-rises of a modern metropolis and traditional city blocks," said BIG partner Andreas Klok Pedersen.

"In that sense the Metzler tower brings a small piece of the human scale city into the skyline."

The tower will replace a building that had been the headquarters of Metzler Bank for nearly 200 years, before it was sold off to New York-based property developer Tishman Speyer.

Related content: see all our stories about BIG and Bjarke Ingels

"We want to create a new type of high-rise, a building that is open and approachable," said Florian Reiff, senior managing director in Germany for the company, which has already completed three high-rise projects in Frankfurt.

He claims that BIG's design will become an example of how work, living and public life can be separated in one building.

"BIG's proposal is a design with a strong presence both at street level and in the skyline, especially the apartment floors and the public base of the high-rise, which are distinct elements in the architecture and make a vivid impression," he said.

The project is the latest in a series of designs by BIG that aim to rethink the traditional form of the skyscraper. The firm has designed twisting towers for Canada and Miami, and towers resembling irregularly stacked blocks in Seoul, as well as at New York's World Trade Center site.

In a movie from 2014, Ingels described his firm's unconventional combination of building elements as "bigamy".

"You can take multiple desirable elements that might not fit together, or even seem mutually exclusive like the garden home and the high-rise, and merge them together into a new genre," he said. "You don't have to remain faithful to a single idea, you can literally marry multiple ideas into promiscuous hybrids."

Demolition has already begun at the Frankfurt site, and the project is scheduled for completion in 2018.

Scroll down for a series of concept diagrams from BIG: