Kengo Kuma and Associates used polyethylene plastic batons to create an elaborate grid across the ceiling and walls of each room of the private member's club, which is simply named Beijing Tea House.

The white latticework is interlaced with translucent blue polycarbonate panels – offering an alternative to the decorative wood panelling and paper screens that are typical within tea houses all over Asia. 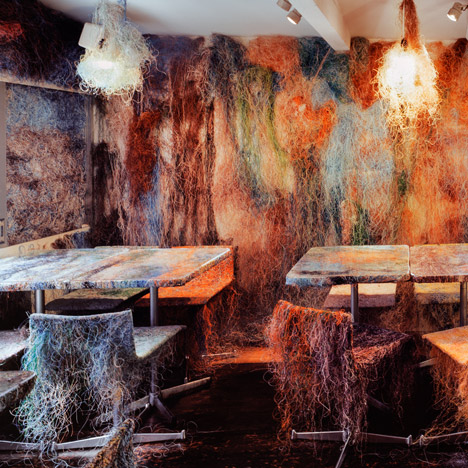 These new walls allow light to filter gently into the building from all sides. They also rise above the tea house's traditional tiled roof to enclose a terrace overlooking the Forbidden City – Beijing's former imperial palace, and one of the city's biggest tourist attractions.

There are numerous tea houses dotted around the outer walls of the UNESCO-listed palace, which was constructed in the early 15th century and occupied by imperial courts until the early 1900s, when it was converted into a museum.

Chinese studio Cutscape Architecture recently completed one to the north-east corner of the complex, inside a pair of converted brick warehouses, while Kengo Kuma's stands at the east gate.

The staggered arrangement of the new walls is reminiscent of the city's traditional brick architecture – which the firm also referenced for a Beijing clothing boutique enclosed with walls of latticed aluminium.

"The main structure for the city of Beijing is masonry bricks," explained Kengo Kuma and Associates. "Blocks made of polyethylene are in this sense a modern version of masonry."

"It proves high performance in insulation and passes through light to create a gentle space of Zen, just as the paper used for Siheyuan [courtyard residences] did in the past," they added.

The white plastic framework was produced through rotational moulding, a process where liquid plastic is inserted into a mould and slowly rotated to produce a hollow form.

Slotted together in varying formations, the blocks create display nooks in the interior walls, and also hang down from the ceiling of each room.

"Four types of blocks were produced by rotational moulding to be joined and stuck up, as the structure of the extended part," explained the architects.

Related content: see all our stories about Kengo Kuma

Dark timber floors and furniture can be found on the ground level of the building, while the two upper floors feature tea rooms decorated with patterned rugs and floor cushions.

Kuma has had a busy year. Other recently completed projects by his firm include a bar lined with tufts of electrical cabling to give it a hairy appearance, a community centre with a hilly floor and a university building covered with hundreds of wooden strips.