Architecture firm Herzog & de Meuron has reframed the cable car station on the top of Switzerland's Chäserrugg mountain by enveloping it within a wooden restaurant building (+ slideshow).

Located in a ski resort within Switzerland's Toggenburg region, the Chäserrugg building stands at the peak of the mountain at an altitude of approximately 2,260 metres. It completely surrounds the 1970s-built cable car station, offering a more comprehensive facility for winter sports tourists.

Herzog & de Meuron – which also recently completed a new stadium in Bordeaux – wanted the building to reference the heritage of its Alpine setting without becoming a pastiche.

To achieve this, the team used locally sourced spruce wood wherever possible, with the addition of contemporary details. They also employed local craftsmen to build the various elements of the structure.

"We tried to develop a language that fits into Toggenburg, without falling into the trap of popular Alpine clichés," explained architect Christine Binswanger, one of the five senior partners of the firm. 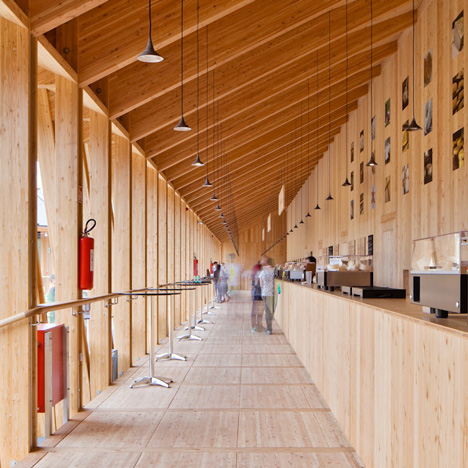 "The participation of local companies provoked a lot of passion," she added. "The construction could thus also be implemented in very resource-friendly way. "

Chäserrugg is the easternmost of the seven peaks that make up the Churfirsten mountain range. The region had been largely inaccessible until 1972, when the cable car was installed – connecting it with Zurich and St Gallen.

A restaurant had also been in operation on the mountain before now, accommodated within the housing originally built for construction workers.

This was demolished to make way for Herzog & de Meuron's structure, while the steel and concrete station was retained and concealed behind the new wooden facade.

"This project involved creating a place that has character in every season and in all weather, to create a mood for skiers who are in a hurry, for groups wishing to spend a day or two days here, but also for hikers and other people who seek peace," said Binswanger.

The completed building is sheltered beneath a low-hung sloping roof, which is supported by a series of branching wooden columns.

The restaurant runs along one side of the structure and is glazed on three sides to offer panoramic views of the Alpine scenery. It features built-in wooden seating areas and a balcony that extends out over the precipice.

The station sits just behind, where cable cars emerge through unusually shaped cutouts in the walls.

All of the materials used to the build the structure were transported via cable car, apart from the crane, which had to be airlifted to the site by helicopter.

The project follows a recent series of small-scale projects by Herzog & de Meuron, which is best known for bigger projects like Miami's Pérez Art Museum and the Beijing Olympic Stadium. The firm recently created a trio of wooden pavilions at the Milan Expo and a biologically filtered bathing lake.

"The mountain station on the Chäserrugg is one of the smaller projects that we dedicate ourselves to again and again," said studio co-founder Pierre de Meuron.

"The courage of the building's owners to start a project in such a place, where for many years nothing has happened, and to attach great importance to architectural quality, is remarkable," he added.

Photography is by Katalin Deér.