Polish architecture students Tomasz Zablotny and Paweł Maszota have unveiled a concept for a community of mobile micro homes that move around an old shipyard on railway tracks.

Zablotny and Maszota, both studying at the Gdańsk University of Technology, propose transforming a post-industrial area in the heart of the city on the Baltic coast into a commune for artists that can be reconfigured at will.

Named Small House on Tracks, the concept is to reuse the site's old railway lines to support a series of tiny mobile homes, all of which can expand when necessary to make more room for their occupants.

"Our idea is to create and modulate a transformable housing complex so that a certain part of the post-industrial area would always be a liveable and comfortable space for artists, interns, workers or simply those to whom the unique atmosphere of the site would appeal," explained Zablotny. 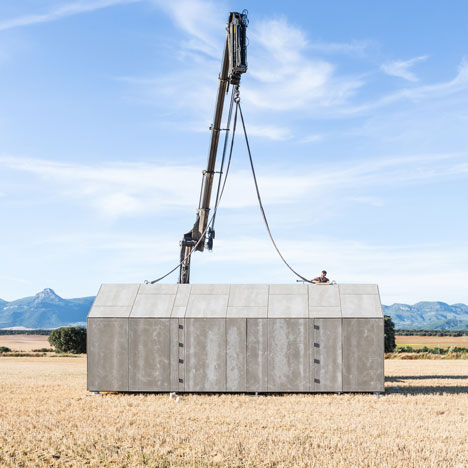 "It's meant to be an initiative that brings back everyday life to the area, making it liveable during festivals and exhibitions, but also on a day-to-day basis," he told Dezeen.

The project follows the same principles as a proposal by Swedish studio Jagnefalt Milton for an entire city on wheels, including a hotel, a swimming pool and a concert hall.

Each proposed unit measures 1.5 metres wide, just over two metres long, and around 2.5 metres high. This would enable more than one to be easily shipped to and from the site on the back of a lorry, or to be stored in a warehouse when not needed.

Once fitted onto the tracks, these units would expand to create an extra metre in width. This allows enough space inside for a small living and sleeping space, a kitchenette and a separate bathroom.

Furniture that isn't in use can be flat-packed or folded into the walls, allowing occupants to make maximum use of space. Items include a folding chair by designer Ricardo Blanco.

"Units can be easily relocated or reorganised according to changing occasions and needs," said Zablotny. "This provides maximum efficiency – only as many units as needed are used, while the rest is easily transported to a warehouse."

The project was completed for a competition calling for inventive housing solutions.

The two designers think installing temporary homes could help to speed up the area's regeneration.

"The shipyard landscape has become a very attractive district in recent years, and many cultural events of local and international scale are organised there," explained Zablotny. "Our units would provide temporary housing for people actively participating in the future life of the zone."

"It has been used as an art colony before, when art students from Gdańsk had their studios and rooms in the old buildings," he continued. "So we saw an opportunity for bottom-up interventions on the site."

The units would be constructed from a mixture of plywood and steel profiles. There would also be several stationary structures dotted around the site, housing communal shower facilities.

Other buildings on wheels designed by architects in recent years include a tiny red theatre, a town square and a series of shelters that look like robots.