The city council of St Petersburg, Florida, has signed off the demolition of a historic pier and approved plans for its replacement – a hybrid pier and park designed by New York studio Rogers Partners.

The pier has been rebuilt many times since it was first completed in the 1880s. It currently features a simple roadway design that terminates with a 1967 inverted-pyramid structure by architect William B Harvard, housing a restaurant and an observation deck.

The new design is intended to evoke Harvard's pyramid even after it has been demolished, while introducing a new landscape and site programme that the designers believe will make the pier a year-round destination for locals and tourists.

"You can't rely on an icon alone. It's long and hot to walk out there," said Rogers Partners principal Robert M Rogers. "The new pier is about experiencing the water and the city from a variety of perspectives."

The new Pier Park, which will be funded by the city, is designed to accommodate large crowds for special events like concerts and walkers wanting to stroll along the waterfront.

Shade will be provided along the structure to improve visitor comfort in Florida's hot climate.

The landscape includes a manmade "coastal thicket" designed by Smith, which will run along one side of the tree-shaded boardwalk for the majority of its length.

Beyond the thicket, a small splash pool with wooden bleachers will allow visitors to dip their feet in the bay water. "Most of the day this will be in shade," Rogers said. "It'll be a very pleasant place to be." 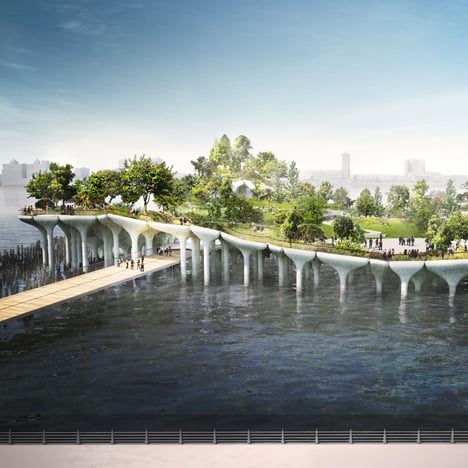 Running parallel to the thicket, a paved track will accommodate cyclists, service vehicles and a small trolley, but not private cars. A pathway crossing under the thicket will bring walkers closer to the water and allow them to spot marine life under the pier.

There will also be new building at the end of the pier, containing a restaurant, a rental hall, an education centre, an a small stage facing a lawn that can accommodate up to 4000 people.

The building is rotated 45 degrees from the axis of the pier to offer views back to the city and out to the bay, while avoiding the direct glare of the sun.

The end of the pier will also have launches for kayaks and paddle boats off floating docks, aiming to offer a more intimate connection to the water than that currently exists on the elevated pier.

The half-mile-long pier will connect to another mile and a half of upland landmass that connects to larger waterfront district, which has numerous hotels and music venues.

"We're excited because the whole waterfront is getting a new master plan," Rogers said. "Much of our work will be making sure that the pier ties into the entire waterfront experience."

The city council approved $5.2 million (£3.3 million) to complete the design and demolish the existing pier. Rogers estimates the project will take at least two years to rebuild.

"The city is very excited about this," he said. "There's a lot of momentum."

Rogers Partners is well-known for its work in public spaces, including its security perimeter around Wall Street in New York. The firm is currently working on a redesign of a portion of the National Mall in Washington, called Constitution Gardens.