The two-storey facility sits along a commercial thoroughfare in Brooklyn's Clinton Hill neighbourhood – where the main campus of the leading art, design and architecture college is located. It formerly housed Pratt's book and art supply store, which has moved online.

New York-based WASA Studio sought to respect the open-plan quality of the building's expansive interior, while creating sculptural, free-standing elements to house the facilities required by the faculty.

"The design is meant to foster such interaction in the spirit of students learning from each other and to create a vibrant and collaborative filmmaking environment," explained Jack Esterson, partner at WASA Studio and a Pratt alumnus.

"Between these 'objects' are interstitial spaces that serve as ad-hoc meeting areas for students to interact, and observe films in progress from several flat screens throughout the space," said Esterson, who was lead architect for the project.

The facility features 23-foot (seven-metre) ceiling heights and no internal columns, made possible by free-span trusses. A "floating bridge" stretches over the ground level and connects various rooms on the second floor.

Volumes that require complete sound-proofing and darkness are wrapped in perforated metal panels designed by Haresh Lalvani, a professor and another Pratt alumnus. 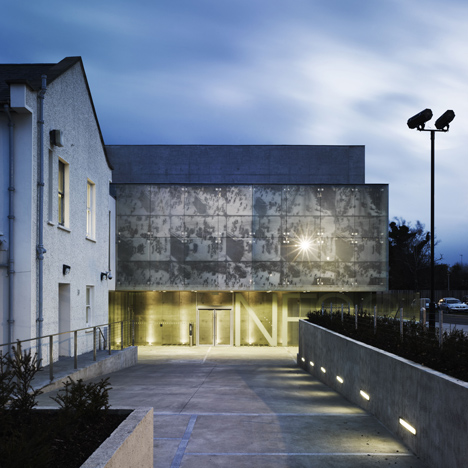 Lalvani drew inspiration from "the origin of fundamental physical phenomena as well as the pixel – the most basic unit of space in digital media and technology," said Pratt.

WASA Studio updated the building's exterior, adding graphics and a new entrance. A screen on the street-facing facade showcases work by students.

Sustainability was a guiding concern during the design process. Eco-friendly elements include high-efficiency LED lighting and the reuse of material from the original building, including ductwork.

Pratt said the new space will enable its film and video department, which currently has 80 students, to increase enrolment and expand its offerings.

"With many important film and video businesses calling Brooklyn their home, the new space will enable us to build even closer relationships with the nearby filmmaking community and generate new academic and professional opportunities for our creative and gifted students," said Pratt's president Thomas F Schutte.

Founded in 1887, the university offers degrees in architecture, design, art, media and related disciplines. It has roughly 4,600 students. In late May, the school announced that New York-based designer Constantin Boym had been selected to lead its industrial design department.

Photography is by Alexander Severin/RAZUMMEDIA.