Seattle-based Olson Kundig was hired to create a new wing for the Tacoma Art Museum to accommodate an extensive collection of Western American art, in addition to renovating existing spaces.

The Tacoma museum has been housed inside a glass- and steel-clad box designed by US architect Antoine Predock since 2003.

"Architecturally, the challenges became opportunities," said firm co-founder Tom Kundig, who led the project. "It was an opportunity to create new venues to view art." 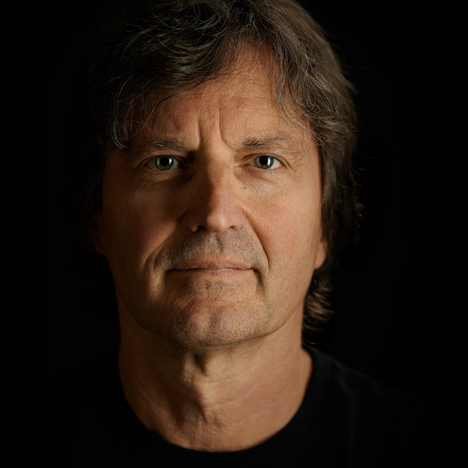 I design products "sort of like Frankenstein" says Tom Kundig

The 7,000-square-foot (650-square-metre), low-slung addition stretches along a major road and is attached to the older building. A 34-foot-tall (10-metre) canopy structure – made of stainless steel panels and aluminium grating – straddles the two buildings and visually connects them.

The new wing's west elevation, which faces the street, features a series of movable screens that are operated by a hand wheel and "roll like railroad box cars across the facade," said the architect. Each screen is 16 feet wide (4.8 metres) by 17 feet tall (5.1 metres).

The screens feature louvres made of Richlite – a local material that consists of recycled paper, fibre and resin. These minimise the amount of natural light entering the galleries, in turn protecting the artwork. Inside, the wing is divided into four rectilinear rooms with high ceilings.

Called the Haub Family Galleries, the new wing is named after the owner of the 300-piece collection of Western American art.

The firm said its design was inspired by the region's industrial history, which includes logging, shipping and railroading. The city of Tacoma was once the western terminus of the Northern Pacific Railroad and played an important role in the development of the American West.

"The creative use of industrial elements, an earthy palette of materials, and mechanical features" enable the building to respond to its context while also helping engage visitors, said the firm.

A revamped entry lobby features a large window wall that provides views of Mount Rainier, one of the tallest mountains in America.

Completed in November 2014, the facility marks the first museum project for Olson Kundig. The firm, founded in 1967, is best known for its rugged, modern houses set in remote locations, such as Studhorse and Rolling Huts.

The firm's projects also regularly feature ingenious hardware systems, including windows that are opened with hand cranks, rural cabins mounted on wheels and a gallery with a facade that is lifted by gears and pulleys.

In 2012, Kundig launched a line of hardware products. The collection now contains roughly 100 objects, including door handles, cabinet pulls, and a fireplace poker and shovel.

In an interview about the products, Kundig told Dezeen that he was not a natural product designer. "We probably don't approach it like a product designer would," he said.

"We look at our products line as a parts store, where you go in and take different pieces and parts from different drawers and assemble them. It's sort of like Frankenstein."

Photography is by Benjamin Benschneider, unless specified otherwise.