"We built it not as a tech product," Behar told Dezeen. "Most technologies like home-tech or IOT [Internet-of-Things devices] are really for early adopters, they're really for younger people."

British Gas hopes to sell the device to the 16 million UK homes it supplies so Behar, who is the founder of San Francisco industrial design studio fuseproject, has designed it to be as familiar and simple as possible.

"Users of these products are going to be everyone from your grandma to your auntie," said Behar. "So the way this was built is that we didn't want to add another screen in the home. I'm a designer in technology but I don't prescribe putting screens on everything."

The product, an update of the first Hive Active Heating device launched in 2013, features an LED display that only lights up when the user touches the controls.

"Once you're done using it, it turns off," Behar said. "It doesn't call for attention, it doesn't sort of scream at you with blinking LEDs or a little window with a screen inside."

The new device allows homeowners to programme their heating and hot water like a traditional thermostat, but can also be controlled remotely via a smartphone or tablet.

Users can choose between comfort or energy-saving modes and can provide a burst of hot water or heating by pressing a "boost" button.

It also features a range of coloured plastic surrounds that can be changed to match home decor.

The product is a rival to existing smart thermostats such as Philippe Starck's Netatmo Thermostat, Honeywell's Lyric device and the Nest connected thermostat, launched by former Apple executive Tony Fadell in 2001. 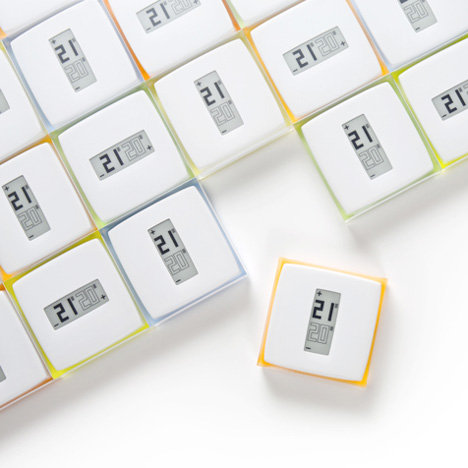 Thermostat controlled with a smartphone by Philippe Starck for Netatmo

In an interview with Dezeen last year, Fadell said he expected that every device in the home would be connected to the internet within a decade.

Behar is a Swiss-born designer and entrepreneur based in San Francisco. In 2013 he unveiled the August Smart Lock, a home security system that replaces physical keys with a smartphone app.

In a 2013 interview with Dezeen, Behar said that designers had been slow to integrate technology into the home.

"It's not about putting a speaker in a chair, or putting a TV in a bed," he said. "That's not how technology and the home intersect. For me, it's about sensors, about the home knowing where you are."

Earlier this year architect Rem Koolhaas expressed concern over connected-home technologies that gather data on how people use their homes.