Floor-to-ceiling glazing permits views across rooms and into the garage of this renovated Chicago office, where the owner's limited-edition Porsche is parked (+ slideshow).

Chicago studio Vladimir Radutny Architects was asked to renovate the office for Ranquist Development Group, a small company that develops and builds homes around the city.

Located in a brick industrial building, the office previously had an inefficient layout, with a garage that took up too much space and a cluster of small rooms at the entrance, leaving the company with just one medium-size room to work in.

"There was very little rhyme or reason for the previous configuration, which had been adapted to suit the needs of various past users," architect Vladimir Radutny told Dezeen. "Crudely speaking, it was a clusterf*ck."

To remedy this, the size of the garage was halved and all internal walls were removed to create an open-plan L-shaped office. This increased the size from 37 square metres to 83 square metres, while a newly landscaped courtyard provides an additional 27 square metres of space at the side.

Inside, gypsum walls and ceilings were stripped back to reveal the building's original brickwork and timber ceiling joists.

"The client wanted an office without any drywall," said Radutny. "The word 'raw' was used maybe 10 or more times in our first meeting."

Concrete flooring was poured in-situ throughout the space to complement the building's industrial aesthetic. Large windows were installed between the brick columns to make the space feel bigger and lighter, including one that frames a view of the client's parked Porsche. 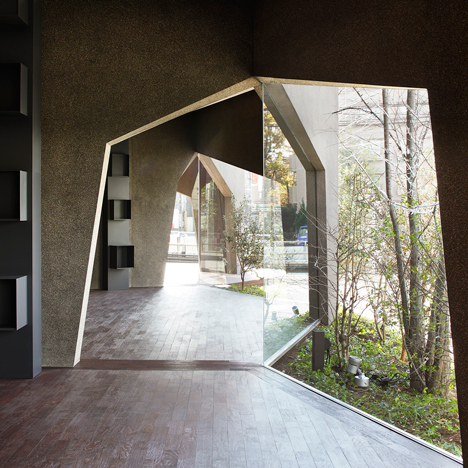 Birch plywood desks, designed by the architects, were added to the centre of the space rather than against the walls, to highlight the newly exposed interior surfaces.

"Our strategy was to emphasise the intrinsic character of the materials used to build this simple box," said Radutny. "First we needed to uncloak its forgotten beauty. Then, once the perimeter was brought back to life, we kept clear of it, and began to introduce components needed for everyday office use."

Metal screens were added to support the weight of the desks, which cantilever out from either side. The screens also create informal partitions between the different work areas, with a double layer of perforations to create a moiré effect.

"The perforated screens create connections between the loosely defined work areas, but also provide some sense of privacy, and if one daydreams, they need something to look at," said Radutny.

"We also needed to lighten the metal structures, and perforations remove about 40 percent of the steel's weight," he added.

A black-painted MDF wall with integrated storage was added to the newly enlarged section of the office, where part of the garage previously stood.

"We chose black because it has inherent depth and absorbs light, but can also appear as if it's not there, like a void," said Radutny.

The office is the first project that Vladimir Radutny Architects has worked on for Ranquist Development Group, which the studio describes as "a test run of sorts".

"We were, and still are, a relatively young practice, and they were looking for someone interested in proving themselves," said Radutny. "This was a unique opportunity to work with a client that has built a lot, and allowed the design process to take place. They challenged our decisions for the better when necessary, but also took steps back and trusted us."