A new layer of polycarbonate cladding was added to improve the aesthetics and usability of the facade areas on three towers, and to transform the existing balconies on each storey into enclosed and sheltered open-air living spaces, known as loggias.

"The renewal of the facades, which is initially designed to thermally insulate the building, opens up an opportunity for a dualistic approach to the rehabilitation," explained LAN Architecture – whose past projects include the archive centre of energy company EDF.

"On one side, the rehabilitation has presented an opportunity to generate more space through creating additional rooms, loggias and balconies," the firm said. "On the other, it has defined a new architecture, visibly distinguishing each city block from one another."

The modernisation of the three towers is part of the regeneration of the Génicart district in the Lormont suburb of Bordeaux. The Brutalist-style concrete towers were originally designed by French architects Jean Fayeton and Francisque Perrier and built between 1960 and 1975 to help provide mass housing when the local population doubled as a result of rapid industrialisation.

There are four distinct sites in the masterplan, of which the Saint Hilaire area containing the tower blocks is the largest and most visible. 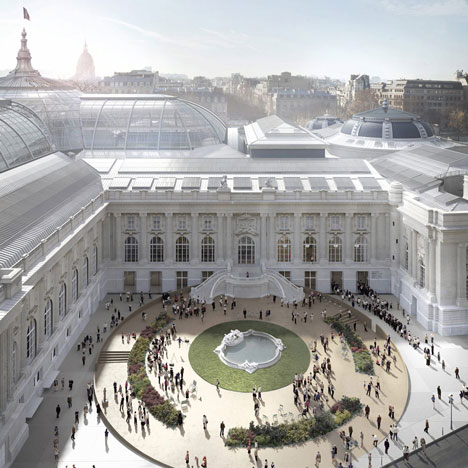 The upgraded facades were pivotal to the overall design concept. "Decisive in the concept was the use of the facade, read as an extension of the interiors," stated the firm. "The loggias surpass [the inside] depth of 93 centimetres to 160 centimetres and remain part of the exterior spaces, maximising the air flow and enforcing the thermal exposure of the buildings' envelopes."

The loggia spaces are accessed through sliding doors from the living rooms in each apartment. The polycarbonate surfaces that cover the previously open sections of the balconies are fitted to tracks, allowing them to slide between open and closed.

"The movable wings attached to the glass balustrade animate the facade and optimise the climate efficiency and the acoustic qualities of the building," explained the architects. "From the outside, the buildings appear light and create a highly visible landmark for this new district."

The sliding polycarbonate shutters sit within aluminium frames, but are also attached to a precast concrete frame that extends from the existing slab. A fixed sill conceals the concrete sections between the movable surfaces.

Alongside the renewal of the buildings, the architects sought to improve the quality of the surrounding public spaces by restricting vehicular access and redefining areas around the bases of the buildings as green parkland.

Pathways, terraces and permanent furniture help create meeting places and landmarks throughout this pedestrianised area. Particular attention was paid to the esplanade between the towers, which accommodates a playground housed in a perforated metal box.

"Taking advantage of every opportunity offered by the need to intervene on the buildings, the project follows an overall strategy of making urban blocks more comprehensive through architecture, whilst keeping the landscape open," the architects added.

Cladding elements were also used as part of the overhaul of the Brutalist Park Hill estate in Sheffield, England, where colourful panels were added to the facade during renovations.