Glass partitions divide up the interior spaces of apartments created within a former school building in the Belgian city of Izegem by local architect Lieven Dejaeghere (+ slideshow).

The Heilig Hartschool is located just west of the city centre and was constructed in phases between 1913 and 1937. It ceased operating as a school in 2007 and Dejaeghere was commissioned by a local social housing company to oversee its transformation into affordable rental units.

The school's two main wings and gatehouse were restored and repurposed to accommodate 17 one-bedroom apartments, with careful attention paid to maintaining the building's original appearance.

"The school has a great historical value for the town and it is very important to preserve that singularity," Dejaeghere told Dezeen. "To conserve the authentic character and the collective memory of the school, the supporting walls, the door openings and the roofs have been kept intact."

Dejaeghere felt it was also important to retain the spatial qualities of the building's interior, so each apartment occupies what was previously one of the classrooms.

Glass partitions are used to separate each of the apartments into a lounge and dining area, a kitchen, a storage space and an en-suite bedroom.

"These walls provide both a physical and partly-visual separation, but ensure that the original classroom remains palpable and visible as a nicely proportioned space," the architect added.

The glass extends from floor to ceiling and incorporates sliding doors that connect the different rooms. The transparent surfaces ensure that plenty of light reaches all the spaces, while textured panels provide privacy where required.

Another reference to the building's heritage is provided by the floor tiles, which feature colours and patterns chosen to recall the school's original floors. 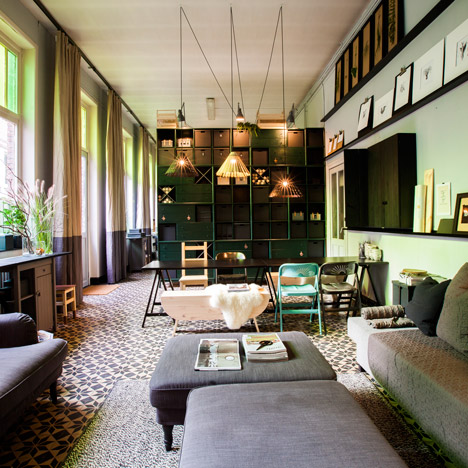 Different colours were employed to differentiate the units on either side of the site, with grey tiles used in the buildings on the east side and brown on the west.

In addition to the restoration aspect of the project, five new two-bedroom terraced houses were added on the southeast side of the site.

The proportions and materials of the new buildings continue the aesthetic language of the school, with red brick walls punctuated by white-framed windows.

A communal social space was also created in the area surrounded by the properties. One section is paved to recall the former playground, while the rest has been turned into a green park incorporating trees and a small pond.

Every residence opens onto the sheltered park area, evoking the way the school children were previously able to spill out from the classrooms into the playground.

Another former school in Belgium was turned into a temporary hotel during last year's Biennale Interieur event, when old classrooms were used as bedrooms. The school building in Kortrijk – set for demolition – also hosted an exhibition about the changing ideas of domesticity and a choreographed waltz performed by robotic vacuum cleaners.