Ford has designed a headlight system that uses an infrared camera on the front of a vehicle to detect the heat emitted from nearby pedestrians, cyclists and animals in poor visibility.

In response, the car shines a spotlight on the potential hazard, which is also flagged up on a dashboard screen display.

"Many people who drive at night have had to quickly react to someone or something suddenly appearing in the road – as if from nowhere," said Ford's vice president of research and advanced engineering, Ken Washington.

"Ford's camera-based advanced front-lighting system and spot lighting help ensure the driver is quickly alerted to people or animals that could present a danger."

Up to eight hazards can be interpreted at once by the system, from a distance of 120 metres. The two hazards deemed the most likely cause of collision are highlighted to the driver on the screen. Yellow and red graphics are used to indicate the level of risk, depending on the source's proximity to the vehicle.

"Spot lighting makes potential hazards in the road ahead more easily visible to the driver – whether that is a pedestrian, a cyclist, or even a large animal," said Michael Koherr, Ford's lighting research engineer. 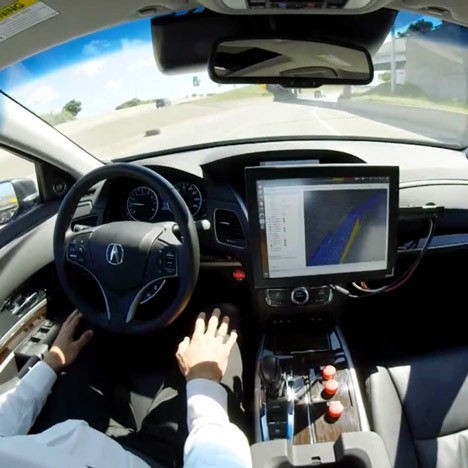 The camera system also interprets traffic signs, enabling the vehicle's onboard computer to recognise when junctions and roundabouts are being approached. As the car nears areas with low visibility, the headlight beam widens to provide the driver with a broader view.

Information from a global positioning system (GPS) is also used to identify meandering roads with unseen inclines and dips, and adjust the headlights in advance.

"Where GPS information is not available, the technology uses a forward-facing video camera mounted in the rear-view mirror base to detect lane markings and predict the road's curvature," Ford said.

The data gathered from the camera is then stored on the system, enabling optimum illumination on the next occasion the route is taken.

"Camera-based advanced front lighting can help make it easier for the driver to travel at night in unfamiliar surroundings, and to more easily see unexpected hazards," said Koherr. "At roundabouts, for example, our system helps the driver to clearly see the exits – and check if cyclists and pedestrians are crossing the road."

Car manufacturers are increasingly using technology to enhance a driver's environmental awareness. Audi, BMW, Toyota and Mercedes-Benz have all implemented their own iterations of night-vision safety technology.

Taking a different approach, British company Jaguar recently unveiled its concept for an in-car warning system that "taps drivers on the shoulder" to warn them of nearby cyclists, while Japanese brand Honda launched automated collision prevention technologies in an attempt to create a "collision-free society".