A sculpture and landscape intervention on the Norwegian island of Utøya has opened to mark the fourth anniversary of a terrorist attack that killed 69 people (+ slideshow).

Bergen architects 3RW's intervention, The Clearing, was created as a memorial for the events that took place on 22 July 2011. Gunman Anders Breivik opened fire on members of the Workers' Youth League (AUF) camping on the island, after detonating a bomb outside a government building in nearby Oslo, which killed a further eight people.

A 12-metre-wide circular clearing overlooking the water has been made among the island's pine trees, where a steel ring measuring four metres in diameter is installed.

The open space is cut into the slope of the site at the back and projects out from the edge, but the ground remains slightly angled.

Rusted steel strips outline the edges of the circle, holding the altered terrain in place and creating small ledges for visitors to sit on.

Within the clearing, a smaller circle of slate paving slabs is formed around sawn tree sections set into the ground.

The steel ring hangs above, suspended from the surrounding trees using cables. The names of 60 victims are cut out from the metal surface.

"When a big tree in the forest dies, an organic process that creates what we know as a clearing begins – open room in the otherwise dense forest," said the architects. 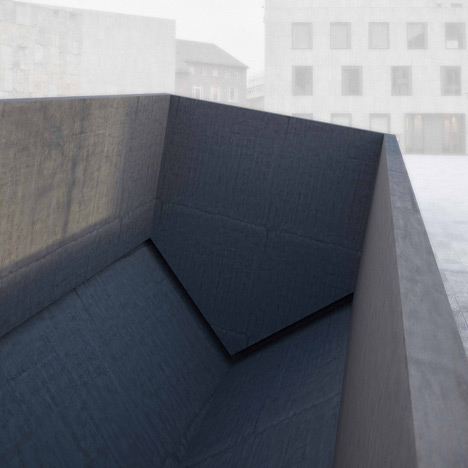 Memorial to all victims by Martin Papcún and Adam Jirkal

"We wanted to develop the memorial on Utøya as such a clearing; forming a clear spot and highlighting all the beautiful landscape qualities that are already in place and in contact with the surrounding environment."

Planted areas between pathways within the space are populated with flowers that will encourage native butterflies.

The ledges offer views over the water to the shoreline, where a strip of headland will be severed as part of the Sørbråten intervention by Swedish artist Jonas Dahlberg that also memorialises the attacks.

3RW won a competition to design the memorial on Utøya island in January. The proposal was designed so that volunteers, the victim's parents and AUF members could all participate in its construction. This collaborative working process is known in Norwegian as Dugnad.

"For us the spirit of Dugnad also can be a vital part of the healing process for those affected by the incidents in 2011," said 3RW. "Through collective and active participation, one is able to produce new positive memories from the island, and form a special ownership to the memorial."