This hanging acoustic panel system by Swedish design student Johanna Jacobson Backman has LEDs set into the underside to provide lighting for desks positioned below.

Their half-oval shapes are mirrored in the cable-tidy system that is also used to suspend the panels from the ceiling.

The concept was devised by ex-electrician and Linné University student Johanna Jacobson Backman in her second year of a design degree, during an industry collaboration with Zero.

The brand liked her idea so much that it decided to put Block into production.

"Johanna's design impressed us, as it was really innovative and would work in all kinds of spaces where you need light- and sound-absorbing features," Zero's Per Gill told Dezeen.

The students were each given an LED module and briefed to think about workplace lighting.

While other students used the qualities of LED lighting to create slim and minimal lights, Backman set about making the biggest light she could. 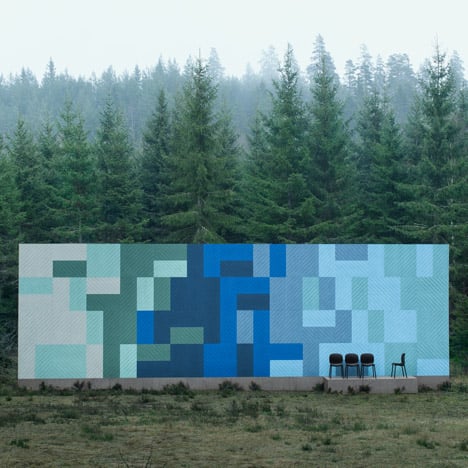 "I love to turn things upside down and think in the other direction," she told Dezeen. The idea for adding sound absorption came to her when considering what function such a large surface area could serve.

Backman's background as an electrician came into play when designing the cabling system.

"I actually thought about how easy it would be for the electrician to hang it and mount it, so when Block is placed in a row, the cable goes up and mounts at the same spot," she said.

The resulting circles and diamonds created by the positive and negative shapes of the cable and panels form a harlequin-inspired pattern.

"I wanted to create a pattern that would break the often straight lines of office areas," explained the designer.

"I hope people dare to be playful with Block and use it in many different ways by combining the different sizes, and hanging it in groups, zigzags or at various levels to create their own pattern," said Backman.

Block was presented at this year's Stockholm Furniture Fair and Milan's Salone del Mobile by Zero, which also debuted a series of lamps wrapped in pastel-coloured textiles for 2015.

Oslo studio StokkeAustad has also combined acoustic panels with additional functionality, incorporating a selection of reflective materials into geometric panels. Swedish studio Form Us With Love's range of colourful acoustic panels made from sustainable materials were recently launched under the new brand Baux.