Named Chicago Horizon, the pavilion designed by Team Ultramoderne will contain a small lending library with architectural books, topped by a large, flat roof made of cross-laminated timber.

Visitors to the viewing platform will stand at chin-height with the roofline. The plane of the roof will screen out the immediate surroundings, focusing views on the expansive horizon of Lake Michigan on one side and the verticality of the skyline on the other. The roof will be covered in a layer of gravel, which will add weight and protect it from Chicago's strong lakefront winds. Events like book talks and panel discussions will be held under the roof.

The kiosk will be erected for the Chicago Architecture Biennial, the first event of its kind in North America. The biennial will open 3 October 2015 and run through 3 January 2016.

Team Ultramoderne consists of Yasmin Vobis and Aaron Forrest, principals of the Rhode Island firm Ultramoderne, and structural engineer Brett Schneider, a senior associate at Guy Nordenson and Associates. The three frequently collaborate and teach together at the Rhode Island School of Design.

The design of Chicago Horizon was largely driven by budgetary constraints, according to the team. 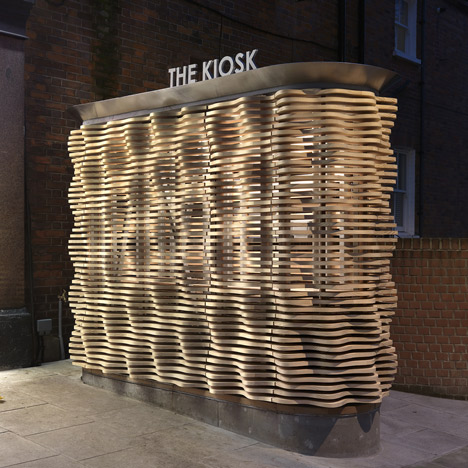 The team decided to ignore the square foot limit. "We decided to see just how much kiosk you could build for $75,000," said Forrest.

By using cross-laminated timber and other low-cost materials, Ultramoderne was able to create a kiosk with 3,200 square feet (300 square metres) of programmable space.

The designers plan to utilise off-the-rack materials in a polished way, they said. "The very simple structure belies a refined complexity," said Schneider.

In addition to the tight budget, the concept was inspired by several design sources. The team cites the work of Mies van der Rohe, one of Chicago's great architects, along with the film Powers of Ten by Charles and Ray Eames — part of which was filmed on the Chicago lakefront.

"We like the flatness and rationalism of Mies and some of the flexibility of the Eameses," Vobis told Dezeen.

The firm itself, Ultramoderne, is named after an essay by the artist Robert Smithson, known for his large earthworks. Land Art, which often used large monolithic forms to alter perceptions of the landscape, is a touchstone for much of the firm's work.

The Lakefront Kiosk Competition, launched in late 2014, asked designers to conceive a new type of kiosk for a site along Lake Michigan, which borders Chicago. The exact location has not been announced.

The competition was organized in partnership with the Chicago Park District and the City of Chicago. Jury members included architects David Adjaye and Sharon Johnston.

The competition attracted 420 entries from around the world. In addition to a winner, the organisers named three finalists.

One of the finalists was Behind the Curtain by Thomas Kelley, Ryan Palider, and Chuck Paros – who hail from Chicago and Columbus, Ohio. They proposed erecting a tall structure sheathed in a veil made of stainless steel mesh.

Comaroff by Lekker Architects was another finalist. The Singapore-based firm proposed building an arched structure with an exterior pattern that resembles shingles.

The third finalist was Lakefront Kiosk by TRU Architekten. The Berlin firm conceived a rectilinear structure made of timber battens, with a roof covered in translucent tarpaulin.

Three additional kiosks are being designed by university teams: Paul Andersen and Paul Preissner from the University of Illinois at Chicago; Kunlé Adeyemi from the School of the Art Institute of Chicago; and Pezo von Ellrichshausen from the Illinois Institute of Technology.