A full-height window and a projecting seating nook interrupt the facade of this suburban Melbourne house created by local studio Pleysier Perkins in a former warehouse (+ slideshow).

The property is located in a vibrant bohemian neighbourhood in the heart of the Australian city's Northcote suburb.

The single-storey warehouse building had been converted into a featureless two-storey medical centre in the 1990s and Pleysier Perkins was asked to oversee its transformation into a residence that responds to its urban context.

The brief called for a three-bedroom house with an open-plan kitchen, dining and living area, as well as a study, wine cellar and garage workshop, to be constructed within the envelope of the original building.

"The existing building offered nothing in the way of character or heritage, but it did offer interesting spatial opportunities – the potential for some large heights, volumes and spaces, quite unique in a residential building," Pleysier Perkins director Simon Perkins told Dezeen. 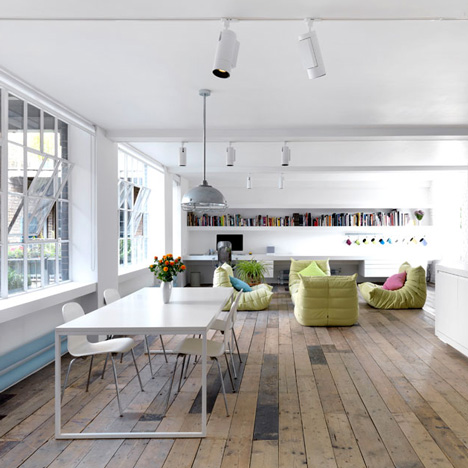 "It's not a house surrounded by a garden, as is typical in Australia, but a series of living spaces on different levels surrounded by two-storey walls built on the boundary, with the opportunity to add a third level set back from the front and rear boundaries."

The architects began the renovation by stripping the structure back to the original single-storey masonry walls, which abutted neighbouring buildings on two sides and were bound on the other two by a street and a narrower side passage.

A garage occupying the rear half of the ground floor was retained as part of the new programme, along with some structural steel beams that helped reduce costs.

Existing walls were extended and rendered to create a homogenous two-storey volume interrupted by openings. These are carefully positioned to allow natural light to enter the interior and provide views out while maintaining privacy.

A third-storey addition set back from the front and rear facades houses the master bedroom suite.

An entrance at the edge of the building leads directly from the street into a seven-metre-high lobby featuring a full-height, north-facing window that fills the interior with daylight.

This concrete-floored space adjoins a timber-decked play area lined on one side by a small artificial lawn, and on the other by an indoor pebble garden containing a Japanese maple tree.

The home's interior spaces are arranged around an oak-clad box containing a wine store and bathroom at the ground-floor level, with a mezzanine lounge on top overlooking the reception below.

"The design concept is a box within a box, so we clad the internal box in oak to give it a rarefied appearance, like a jewellery box," explained Perkins.

"Spaces and rooms exist in, on or adjacent to the internal jewellery box. Thereby a series of unique and contrasting spaces are positioned according to their use."

The ground floor also contains two bedrooms and a connection with the garage workshop. A wooden staircase with a slender profile situated in the void next to the timber box ascends to the first-floor lounge.

The lounge adjoins a kitchen and dining space that opens onto a decked terrace at the rear of the building. A study overlooking the entry void also contains a window seat that projects outwards from the north-facing elevation.

Some of the openings in the facade incorporate operable windows, which are screened by perforated metal panels that ensure they are secure while allowing light and air to pass through.

Photography is by Brendan Finn.