The scooped walls of this aluminium-clad retail and housing complex were designed by Iroje KHM Architects to mimic the concave roofs of traditional Korean houses (+ slideshow).

The Seoul practice, which is led by HyoMan Kim, designed the Archi-fiore building for a site in the Cheoin district of Yongin, a city to the south of Seoul.

The scalloped concrete structure is finished with white aluminium sheets, while large panes of glass enclose an elevator shaft and external stairwells.

The building's curving outline refers to the concave pitched-roof structures that are traditional in Korea, as well as the elliptical form of a gymnasium that sits opposite.

"The most influential existence in the surrounding site is a huge gymnasium with a round shape," explained HyoMan Kim. 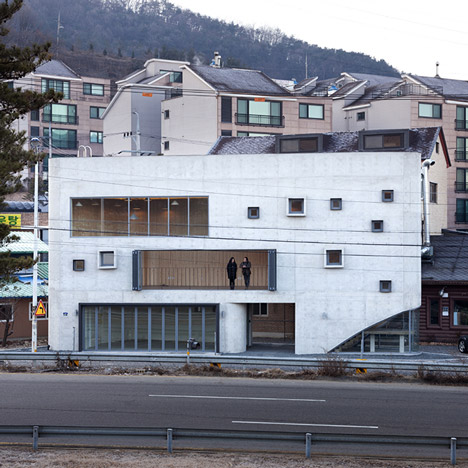 "To create a dialogue with the round mass of the gymnasium we designed this project as a curved shape, which is derived from the minus curve of traditional Korean roofs."

HyoMan envisioned the six-storey building as a vertical town. It houses eateries, offices, garden terraces and a penthouse apartment.

Terraces cut into the facade are connected by glazed staircases, allowing visitors to meander up the facade to reach the upper levels.

"We don't want this complex building to be considered as one building, but a small town consisting of four independent buildings," explained the architect.

The coffee shop and parking are located in the base of the structure, while the restaurant is on the first floor and an office is on the second.

The duplex apartment, which has exposed concrete walls and wooden floors, occupies the uppermost levels.

It features a metal-framed balcony with a scalloped edge and a split-level roof garden with paved patios and a small pond.

"We expect this complex building will be the architectural flower and landmark of this town," added the architect.

Archi-fiore is the latest in a series of buildings in South Korea featuring unusual facades that help to distinguish them from their neighbours. Other examples include a Seoul photography studio with a facade of concrete frames, a pair of mixed-use blocks with curved cut-outs, a building with protruding house-shaped windows.