South Korean studio Tectonics Lab has completed a house for a retired professor in Seoul, featuring pale brick facades interrupted by arching windows that frame views from rooms arranged around a skylit parlour.

The studio founded by architects Hyundai and Sukyung Kim designed Cheongun Residence for a site in the South Korean capital's historic Cheongun neighbourhood that looks towards the nearby Bugaksan Mountain.

After years of deliberations, the client decided to demolish the 50-year-old house she grew up in to make way for a contemporary home tailored to her needs in retirement.

Some of the original features of the house built by the client's father, including wood flooring, window latticework and door plates, were salvaged during the demolition process and re-used in the new building.

In keeping with East Asian architectural tradition, the house was organised as a square grid that creates a sense of symmetry around the double-height central void.

"The nine-square grid was applied horizontally in plan and vertically in section as regulating geometry," Hyundai Kim explained. "The void space at the core centres an axis that compresses the public realm into the centre while disseminating private space to the periphery."

The interior is arranged so each zone is designated a specific function, which allows the building to fulfil its purpose both as a residence and a research institute.

The property's entrance leads into an arched corridor that opens up to the central parlour and provides a view through to the dining room beyond.

Arches are used throughout the building as a motif that Kim said helps to "deal with the spiritual aspect of materiality".

"The Cheongun Residence is located in the most historic district of Seoul, which involves the paradoxical coexistence of traditional, colonial, and contemporary architectural scenes," he added.

"An arch may be the metaphoric interpretation of coexistence, preserving collective memories of the neighbourhood's patinated materiality."

A larger arch in the wall of the parlour is mirrored by a glazed arch in the external wall that frames a view of the garden. The parlour separates a guest room on one side from the kitchen and a maid's room.

A conservatory positioned alongside the dining area features a brick wall and sliding door that help to create a visual and physical connection with the external spaces and garden.

The curved corners of the parlour's concrete walls soften the edges of a space that is illuminated from above by a skylight set at the apex of the building.

Stairs ascend from the parlour to a first floor containing the master suite and a library, which are positioned on opposite sides of the void to emphasise the separation between work and living.

The third floor accommodates a tea room arranged around the light well. The square plan with the light well at its centre enhances the sense of symmetry that pervades the building's design.

"This tea room has a concentric square geometry in plan and section that becomes the spatial, iconographic centricity of the house," said Kim.

"The compression of the space by the solid light-well tube harmonises with the spatial release through the horizontal windows."

The building's exterior, as well as the conservatory and verandah, are clad in pale recycled brick. The use of the same material throughout these spaces creates a sense of consistency between inside and outside.

The house's entrance facade has a symmetrical appearance that is accentuated by a central axis culminating in an arched window set into the wall of the staircase directly above the front door.

Arches dominate the southern, garden-facing elevation, which is only partly symmetrical. Openings on the upper level frame views from the verandah, while a double-height window set into the wall of the conservatory also allows light to reach the library above. 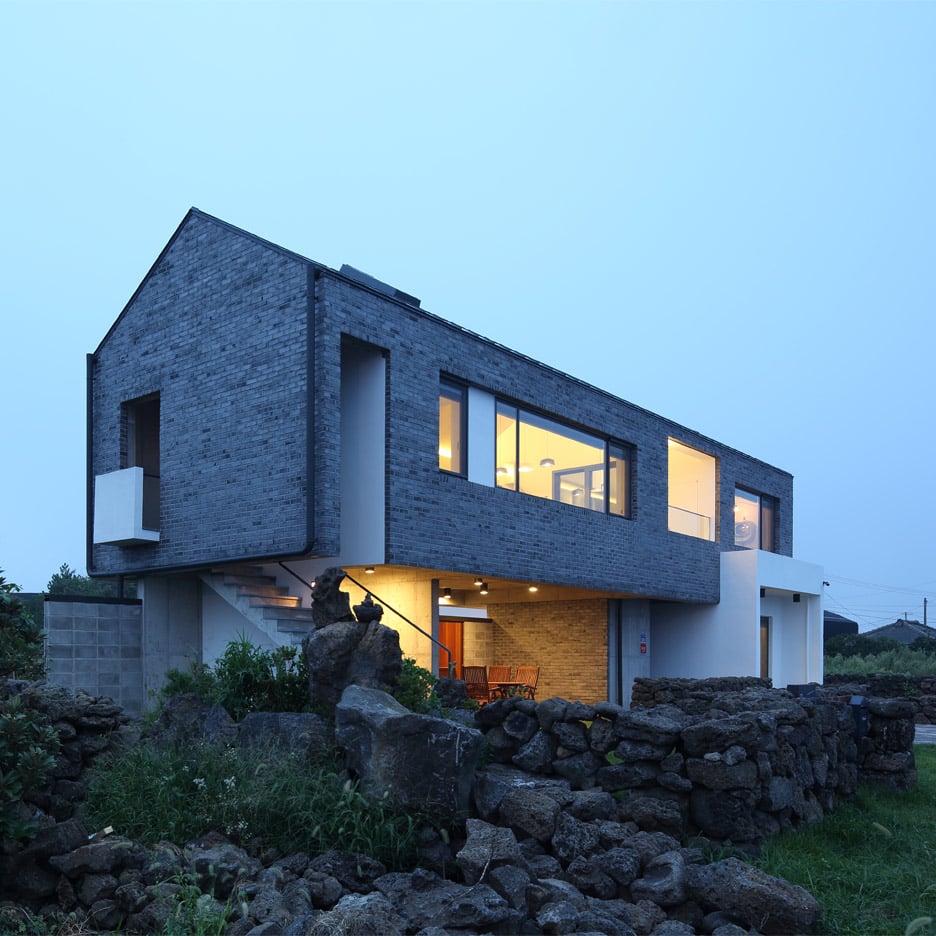