This family home near Gyeongju, South Korea, is surrounded by thick bands of fluted concrete, which offer a play of light and shadow.

Designed by architect Jaebok Choi of South Korean studio ODE Architects, W House is a two-storey, 298-square-metre property designed to respond to its setting between the city and the mountains.

It brings together curved, straight and textured surfaces, and features a range of materials that include concrete, stone, bricks and wood.

The concrete bands are the most prominent feature, wrapping all four sides of the house. ODE Architects sees these as a contemporary interpretation of the curved roofs of Hanoks – the traditional tiled-roof properties found all over South Korea.

"The eaves extend with the similar proportion to Hanok eaves," said Choi.

"The free-formed eaves fall in line with the surroundings by softly and elegantly embracing the mountain terrain, like the inside waistline of Hanok eaves, thus allowing the building to become part of the scenery."

The fluted surfaces are intended to mimic the proportions of the concave roof tiles that feature on Hanok houses.

"The concave tiles and patterns project the movement of light as shadows, and subtly gives distinctness and clarity to the movement and existence of light," said the architect.

The building is fairly long and linear in plan, with a couple of rooms that extend out to the north and south. Outdoor terraces are located on both levels.

"The main rooms are situated around the south garden and have open windows facing south," said Choi. "Service areas are placed on the north side to offer convenience and a sense of independence to the main rooms."

The ground floor accommodates the main family living spaces, including a double-height lounge, and a combined kitchen and dining area. One bedroom is also located on this level.

Upstairs, there are three further bedrooms, an extra living room and a small study.

These are arranged in a row, connected by a long corridor. Many of the partition walls are made from glass, to help light filter through.

"The corridor is comprised of a long ceiling, so that light seeping in through the space on both sides divides the space and accompanies people walking through the corridor," added the architect. 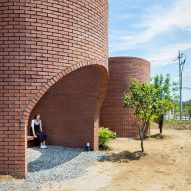