The single-storey building was designed to have a minimal impact on the surrounding properties, so it is largely hidden behind the brick boundary wall that forms its street-facing elevation. It also features a spiralling plan, hence the name Spiral House.

The Balham site was originally the garden of a neighbouring building. Jack Woolley and his wife Polly bought the site at auction with the aim to turn it into a home for themselves.

Drawing on his experiences with Old Workshop – a home and office hidden behind a brick wall with a mysterious door – the architect designed the house to be inward-facing and barely noticeable.

"It was because of my experience with Old Workshop that we could see the potential of the site," Woolley told Dezeen. "Like that project, the long view from the street is important for the neighbourhood, and the low profile of the building preserves it."

The spiralling plan was created by continuing the brick boundary wall into the centre of the site. It frames an almost rectangular building with an area of 90 square metres, while the leftover space provides a private courtyard. 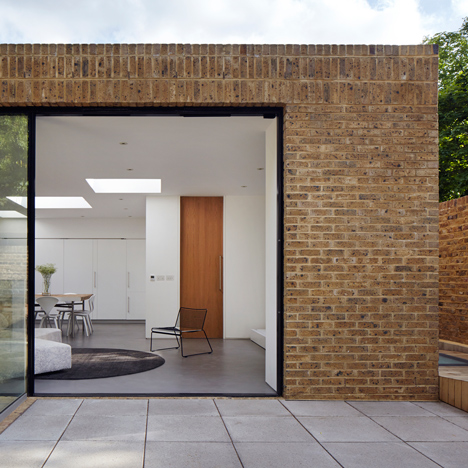 The house is slightly sunken below ground, so the courtyard gently steps up to mediate between floor and street level.

Woolley sourced Roman-style bricks – longer and flatter than typical bricks – from Belgium to build the walls. The aim was for the building to appear similar to, but also unique from its neighbours.

"I chose these bricks because the colour matches neighbouring buildings, but the different shape helps mark the building out as subtly different," Woolley explained.

"The combination of red brick and white is taken from the neighbourhood as well – the building immediately to the left is white with red brick details; the building to the right is red brick with white details," he added. "The street elevation of Spiral House is made from these two finishes, alternating in a way that is intended to create a rhythmic link."

A window wall completes the house's courtyard facade. Behind it, a large living and dining space is divided by a central kitchen worktop. A skylight stretches across the entire space, measuring 11 metres in length.

The area at the other end of the property functions as bedrooms. A flexible partition in the centre means it can be subdivided if necessary, or opened to create one large space.

A concrete floor unites indoor and outdoor spaces. It also allows the building to have passive heating and cooling, as both the floors and the walls store heat and release it slowly across the day.

The architect covered the roof with plants, with the intention to create a view from neighbouring windows similar to when the site was a garden. 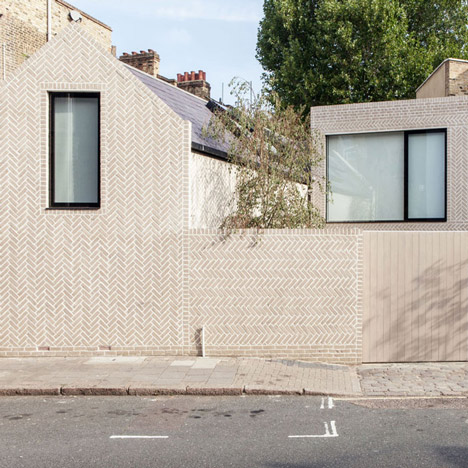 Woolley said the biggest challenge of the project was getting rid of an infestation of Japanese knotweed from the site before work could begin. "It made the excavation complicated, but had the advantage of making the site unappealing to developers and hence affordable," he said.