Turkish creative consultancy Designnobis has devised a temporary shelter that could be easily transported and quickly assembled to house those displaced by natural disasters (+ slideshow).

Hakan Gürsu of Designnobis created the Tentative shelter after noticing the lack of available temporary housing following earthquakes in his native Turkey. He was also spurred by the statistic that natural disasters displaced 22 million people in 2013 – three times more than war.

"After natural disasters many people become homeless, it is very crucial to provide sturdy temporary shelters that can handle complex structures and these shelters are needed quickly," said the designer. 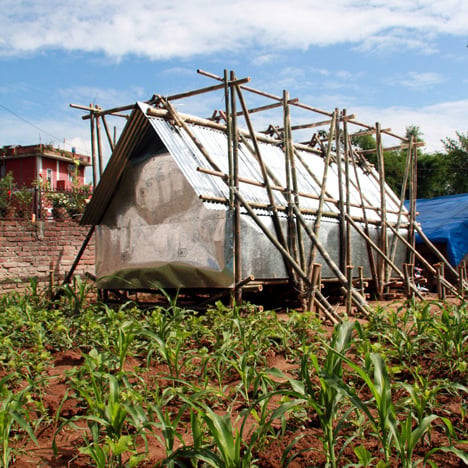 Tentative's moulded-fibreglass roof and floor are held in place and off the ground by an aluminium frame. They are connected by a weather-resistant quilted fabric with thermally insulated perlite – a form of obsidian used for insulation – between the layers, which forms the walls.

Fibreglass doors, which fold up from the floor, provide more security that traditional tent doors.

"To fully expand Tentative, all we need to do is to open the covers used as a roof and floor, raise aluminium structural parts and the doors to provide stability and stretch the fabric between the roof and the floor," said Gürsu. "This innovative and instant installation provides rapid accommodation after a disaster strikes."

The whole construction collapses down into the roof and floor, which come together to form a 30-centimetre-high shell for transportation, enabling 24 units to fit onto a single semi-trailer truck.

The roof is designed to bring natural light and ventilation into the space, as well as to collect rainwater, which can provide safe drinking water.

The floor includes recyclable thermal-insulating composite decks, and heat loss is further prevented with legs that keep base above ground level.

The structure measures four metres long, two metres wide, and two and half metres high when erect. It is designed to provide space for two adults and two children to eat and sleep, affording a small family some privacy and an individual living space.

The field of disaster relief is becoming increasingly examined by designers and architects. In March, Ikea announced it would be producing 10,000 of the flat-pack temporary shelters designed in 2013 for refugees made homeless by conflict and natural disasters.

Shigeru Ban unveiled designs last month for modular housing structures to accommodate those made homeless by the two earthquakes that struck Nepal earlier this year. Brooklyn firm Garrison Architects' prototype for post-disaster housing was described as "a step forward in the way that cities respond to natural disasters" like hurricanes Katrina and Sandy.

The Tentative shelter won the Silver Award in the Social Design category of the A' Design Award 2014-2015 and has been nominated for the 2015 Design Index.