Shigeru Ban has unveiled his designs for modular housing structures to accommodate those made homeless by the two devastating earthquakes that struck Nepal earlier this year.

The Pritzker Prize-winning Japanese architect – who has previously worked on disaster relief projects in New Zealand, Sri Lanka and Japan – has developed a prototype structure for the victims of the April and May 2015 Nepal earthquakes.

Believed to be the worst natural disaster to hit the country for over 80 years, the two quakes caused the deaths of over 9,000 people and injured more than 25,000.

Ban's design, known as the Nepal Project, aims to provide new houses for some of the hundreds of thousands of people whose homes were destroyed, using rubble sourced from the huge piles of earthquake debris.

Wooden frames measuring 210 by 90 centimetres would provide the structure, while the roof would be built using a truss system of cardboard tubes – a material that Ban has used extensively throughout his career.

Rubble could then be used to infill the walls, while thatch would cover the roof.

"This simple construction method enables anyone to assemble the wooden frames very quickly and if a roof is secured on top, and the wooden structure covered with a plastic sheet, people can immediately begin to inhabit the shelters," said Shigeru Ban Architects.

"Afterwards, people can stack the rubble bricks inside the wooden frames and slowly complete the construction themselves."

The studio aims to complete the first prototype later this month. It is also working with Ban's disaster relief charity Voluntary Architects' Network (VAN) to deliver tents to affected areas for use as shelters and medical stations. 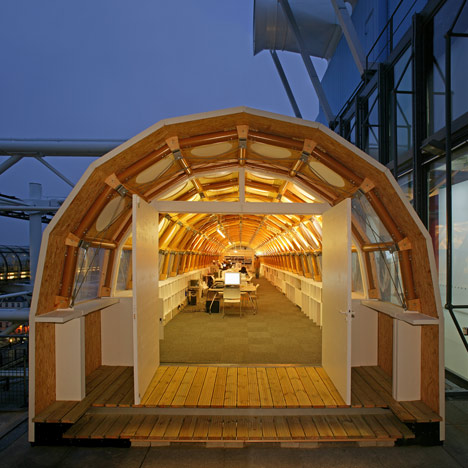 "There are some projects which we had done and we will approach with our experiences for the recovery of Nepal," said the studio.

Shigeru Ban was awarded the Pritzker Prize in 2014, in part due to his pioneering use of cardboard in disaster relief around the world. Other projects by the architect include the Centre Pompidou Metz in France and the Aspen Art Museum in Colorado.

Renders are by Calzada Visualization, courtesy of Shigeru Ban Architects.