The owner of the former Moss gallery in New York is selling 60 pieces – from lighting fixtures to homeware – by leading designers including the Campana Brothers, Marcel Wanders, Philippe Starck and Studio Job (+ slideshow).

The objects come from Murray Moss' personal collection, along with the archive of his eponymous Soho gallery, which opened in 1994 and closed in 2012. The store was shut due to "a perfect storm of high overhead and lagging sales," according to reports.

The pieces are being sold through an online auction that ends 9 September 2015. It provides a rare opportunity to explore the gallery's archives and get a sense of Moss's "extraordinary eye".

"The auction is a window into the incredible talent that Moss cultivated during its 18 years as a Soho design mecca, championing talents from the Campana Brothers and Ted Muehling to Maarten Baas and Philippe Starck, and establishing an aesthetic that was emulated worldwide," said Paddle8, an online auction house that specialises in design, fine art and jewellery.

One of the items up for sale is the Monumental Favela Tree by Brazil's Campana Brothers. Released in 2004, the home accessory is made of pine, steel and metal screws, and is valued at up to $15,000 (£9,800). 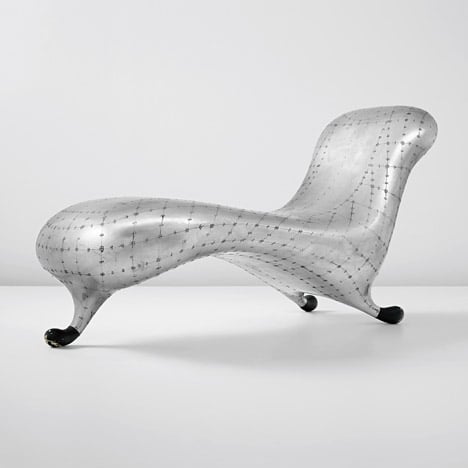 The auction also includes a set of four lead-free crystal tumblers by Adolf Loos, the Austrian architect who rejected ornamentation in design. Dating to 1931, the Red Wine Tumblers are valued at $400 to $600 (£260 to £390).

Today, Moss – who was born in Chicago – lives in Midtown Manhattan with his life and business partner, Franklin Getchell. Both are former actors. When they opened the Moss gallery in the 1990s, they set out to create a "design theatre" rather than an exhibition space.

"I first regarded our visitors, who were of course there as potential customers, as an 'audience,' and I instinctively followed that paradigm," Moss recalled in a recent interview.

Getchell told Dezeen they are selling the items due to life changes. "We're leaving the city and we want to divest," he said. "We love these things, but it's time to let go of some of them."

Moss and Getchell now run a design consulting service called Moss Bureau, which provides curatorial assistance for residential and commercial projects, and assists museums in revamping their retail efforts. Moss recently published two books for Rizzoli and is currently working on a third.

Other recent auctions from Paddle8 include one in which experiences with starchitects – such as a ride in Norman Foster's helicopter – were sold to raise money for the Van Alen Institute, a New York-based think tank.

More from the featured designers