Znameni Ctyr Architekti has replaced a run-down mountain chalet in the Czech Republic with a similar but more contemporary version that leans outward as if about to fall over (+ slideshow).

Named Chalet Saint Peter, the house is located on a slope in the Krkonoše mountains, which extend along the Czech-Poland border to divide the historic regions of Bohemia and Silesia.

Its predecessor was demolished after becoming "dilapidated". The client asked Prague-based Znameni Ctyr to create a contemporary replacement, but the architects instead proposed a design that combined traditional and modern details.

"Despite the primary impulse of the client to implement a visually, technologically and typologically contemporary object, it was impossible to ignore the strong vernacular elements of the surrounding buildings," said architect Juraj Matula. 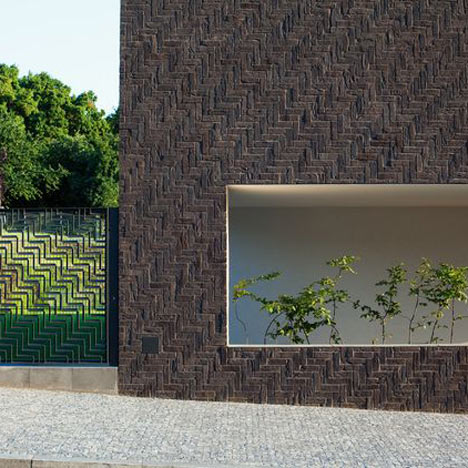 "The aim was not only for a creation of a quality concept from an architectural point of view, but also for it to be a part of the natural environment."

A typical feature of mountain chalets in central Europe, both in Alpine regions and elsewhere, is a staggered profile that steps outwards towards the roof to create more floor area inside. Znameni Ctyr adapted this model to create a building that angles outwards on both of its end walls.

This has the benefit of protecting the walls from rainwater. But it also creates the impression that the building is leaning, or even falling over.

"The gable walls of chalets in Krkonoše mountains are often stepped and overhanging above the ground level," said Matula. "Our design utilises this characteristic element and transforms this stepwise overhang into a gradual extension of the gable wall in the outward direction."

The house contains four storeys: two set into the sloping ground and two upstairs. Granite flagstones give the building a solid and hardwearing base, and laminated spruce provides the main structural frame.

The architects chose red cedar for the cladding, which creates vertical and diagonal stripes across the walls. They also used sheets of copper to create a mansard roof with raised seams that follow the stripes of the wood.

Oak-framed windows lend symmetry to the elevations. Most are rectangular, but the two end walls both feature a square window turned by 45 degrees to look like a diamond.

"The facade consistently consists of natural materials, which gain patina over time," Matula said. "With its low ceiling height and careful placement in the sloping terrain, the house acts as if it has grown from the surrounding nature, and the attention of the viewer is drawn to the silhouette of the roof."

Inside, wooden walls and roof trusses are left exposed throughout. The main living and dining spaces occupy the first floor, along with a generous kitchen.

A spiral staircase leads up to the second floor – an attic space containing the master bedroom and a library. Additional living rooms and bedrooms can be found on the upper and lower ground floors, as well as a sauna, a wine store and a garage.

Znameni Ctyr is led by Matula and partners Martin Tycar and Richard Sidej. Past projects by the firm include a pair of Prague apartment blocks featuring herringbone brickwork and fretted screens.

Other recently completed projects in the Krkonoše mountains include an environmental education centre with raw concrete ceilings and a faceted green roof.

Photography is by Tomas Soucek.

More houses in the Czech Republic