The 10 limited-edition stands form a collection named Tutti Frutti – "all the fruits" in Italian.

All are designed for displaying or serving different kinds of fruit, with transparent glass chosen to contrast with the colourful foods.

A statement from Fabrica described the pieces: "Elaborate three-dimensional compositions – which stand up by themselves or are made to be hung – in a perfect balance between the multicoloured verve of different fruits and the fragility of glass."

The collection includes Sam Baron's Carmina stand, which features curved hooks for fruits like bananas or grapes above a bowl that can be used to store lemons or oranges. A hanging version frames the hooks within an octagonal frame.

Mariana Fernandes also uses a frame to highlight a spherical fruit within a tripod stand, but her version is square. 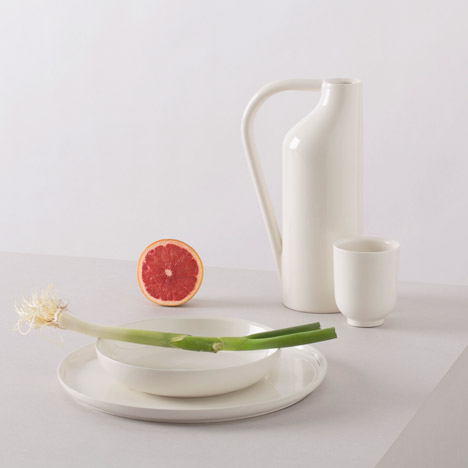 The story of William Tell, who shot an arrow through an apple balanced on his son's head, is interpreted in Daniela Mesina's design that skewers the fruit and holds it midair.

Catarina Carreiras' SeeSaw balances a lemon on one side with grapes on the other.

A tiered design by Giorgia Zanellato is made up of four two-legged stands with conical cups at the top of each. The containers increase in size as the legs get shorter, with a cherry placed in the highest stand down to a pineapple in the lowest.

Kirsty Mins has incorporated coconuts into her pieces, which support a bowl for fruit and a jug for juice on top of glass tripods.

Summer Rain by Charlotte Juillard holds strawberries in the ends of suspended bent-glass tubes, and Sin by David Raffoul dangles one apple from a hook above a plate filled with the same fruit.

Finally, a pear forms the focus of Valentina Carretta's large vessel as it sits suspended on a vertical glass tube in the centre of the angular case.

Fabrica was set up in 1994 as the research centre of the Benetton Group. Based in Treviso, Italy, the studio accepts a small number of young designers to work on collaborative and individual projects each year.

Recent examples include tableware created to reflect the fusion of different cultures, a collection of artisan-made objects, and desk tidies for both plants and stationery.

The Tutti Frutti collection is on show as part of the 10/10 exhibition at Paris gallery Moda, coinciding with this month's edition of biannual trade fair Maison&Objet.

Opening today, the fair is being held at the Nord Villepinte exhibition centre to the north of the French capital until 8 September 2015. Outdoor furniture by the Bouroullec brothers for Hay and a ballpoint pen that can digitally record and store notes are among the designs on show.

The exhibition at Moda, located at 8 Passage de la Boule Blanche, is curated by François Bernard and continues until 3 October 2015.