The top of this house for two former politicians near Hastings, England, has been angled and cantilevered to capture views of the sea and provide a covered parking space beneath (+ slideshow).

Split House by London-based architecture firm Alma-nac replaces a 1950s bungalow and dilapidated barn in the village of Fairlight, on England's south coast. It is owned by Jacqui Lait, a former Conservative Party member of parliament, and Peter Jones, former leader of East Sussex County Council, who asked the architects to design a sustainable home that would celebrate its hilltop location.

"The headline of the brief was for a design befitting the incredible coastal site," architect Caspar Rodgers told Dezeen. "They have a long-running interest in architecture, and wanted to build a bespoke home that would also meet their needs as they grow older."

To best capture the surrounding views, which take in the sea, a wildflower meadow, and the headland of Dungeness in the distance, the architects split the house so that it juts out in three directions. 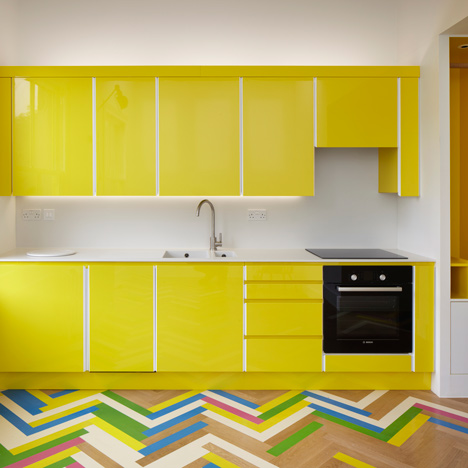 The ground floor is angled in two directions away from the entrance to enclose a wind-sheltered space overlooking the meadow at the back, while the upper level cantilevers out six and a half metres at the front to frame a view of the sea, glimpsed between neighbouring houses.

"The south-east orientation has one of the best views from the upper level, and the least outlook from the ground level," said Rodgers. "This led us to design the fractured, cantilevered form, which provides the owners with both a lookout and covered carport."

The ground floor houses a kitchen and dining room on one side, and a guest bedroom and pool on the other side, while the upper level houses two bedrooms, a living space, and a library in the cantilevered section.

"By placing the library here, the owners can watch visitors arrive, and see weather fronts rolling in over the sea from their desk," said Rodgers.

The upper level of Split House is clad in a slate rainscreen – a construction method that involves raising the cladding slightly off the surface of the walls to prevent moisture from getting in. Windows were set slightly into the walls to create shadowed recesses across the home's exterior as the sun passes.

"The home's split form acts like a large sundial on the site, and the materials and recesses on the facade accentuate this changing quality of light throughout the day," said Rodgers, who chose Accoya wood for the window frames – a timber that is specially treated to resist warping or decaying.

Iroko wood was used for the flooring inside and was chosen for its variation of colour and pattern. Lilac cabinets were picked by the owners for the kitchen.

"They wanted a real splash of colour and personality in this room," said Rodgers.

The owners also specified coloured grout and tiles for one of the bathrooms, which were laid at alternating angles to create an abstract herringbone pattern across the walls and floor.

To meet the potential future needs of the owners as they grow older, the house has been fitted with a lift to allow easy access between the floors, and all thresholds are flush so wheelchairs can move about easily. The lower level has also been designed so it can be split into a separate residence in the future, if needed.

Construction for the house, which has an internal floor area of 400 square metres, was completed in 18 months.