Guy Hollaway's Pobble House is the latest architect-designed addition to the Kent beach, best-known as the former address of the late artist Derek Jarman, but also home to a rubber-clad house by Simon Conder Associates and a tar-coated residence by NORD Architecture.

Named after the Kentish word for pebble, the holiday home was designed for a client with a growing family who, like many, is attracted to the remoteness of the shingle beach and its historic fishing community. 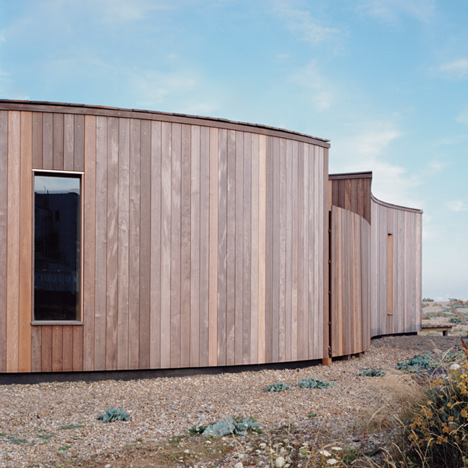 Strict planning restrictions in the area stipulate that any new structure must be built in place of another, to roughly the same size and proportions, which set the template for the house as a single-storey structure made up of three blocks.

The brief from the client was to make these volumes respond to their setting, so Hollaway's team proposed a palette of materials that would show their age, much like the old fishing shacks dotted along the beach.

A mixture of larch boards, cement fibreboard and Corten steel mesh was used to clad the walls and rooftops of the three adjoining cabins.

"The building is extremely durable, an important aspect considering the harsh climate and exposed setting. The exposure will cause the larch and Corten to weather silver and red respectively – an echo to the natural landscape," said Hollaway.

The base of the building is raised above the beach by half a metre to reduce its impact on the shingle. This also provides a private deck at the southern end of the building that allows the occupants to dine outside.

A generous family living and dining room occupies the adjoining block, with a kitchen running along the rear and a wood-burning stove at the front.

The dining area is built into a recess along one edge of this space and features a long narrow window that frames a panoramic view of the horizon, dominated by the "robust materiality and form" of the Dungeness Power Station.

Bedrooms with enough room to accommodate two families are housed in the two accompanying blocks, one of which is connected by a floating glass corridor.

Rubber waterproofing seals the house's timber frame construction, helping to drain away rainwater on stormy days, while in summer residents can slide open glass doors to open the interior up to the breeze.

"Whilst being designed to an incredibly tight budget of under £250,000, the building has a very high quality and robust nature to withstand the harsh climate," added Hollaway.