This multifunctional building by French studio PPA Architectures, provides a residence, gallery, workshop and events space, and stands at the edge of a golf course on the outskirts of Toulouse, southern France (+ slideshow).

Called Pavilion M, the U-shaped building wraps around a cobbled yard and swimming pool in the centre of its suburban plot in Toulouse. One windowless facade points towards the street, protecting the privacy of the transparent walls that overlook the golf course to the rear.

Local studio PPA Architectures formed the building from three concrete blocks that provide the owner with a multi-purpose space, containing bedrooms, a workspace and a gallery.

Living areas are designed to double up as exhibition spaces during events, so the rooms are open-plan and devoid of in-built furnishings.

"The environment in which the building attempts to integrate itself is characterised by a stark contrast between the disordered sprawl of the suburban estate and the seemingly limitless international golf course of Toulouse," said the architects. 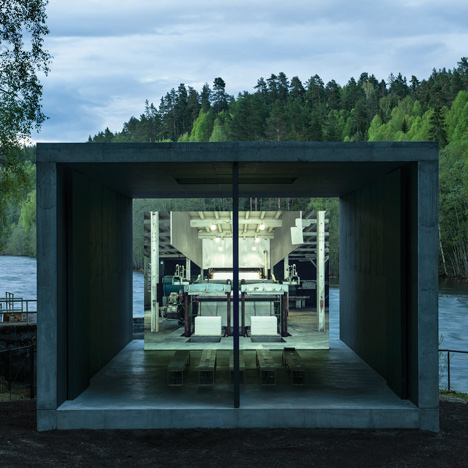 "The atypical architectural concept defines this pavilion as a support for multiple purposes and uses. The building aims to be a place for reception, work, meeting, exhibition, creation or accommodation, while being enjoyed and considered as a living space."

The two-storey block that faces the street has windowless concrete walls and a polycarbonate-clad workshop, while four upper-floor bedrooms with glazed walls point towards the courtyard and golf course.

The workshop, which is also used as a garage and the building's main entrance, is set into the centre of the facade. Its translucent cladding differentiates the volume from the concrete and glass walls that dominate the rest of the building.

A wide polycarbonate door opens upwards, connecting the workshop with a patio to also provide a semi-outdoor events space.

"The workshop is an autonomous unit, hence its specific treatment," said the design team. "It resonates nevertheless with the common concept by offering a multipurpose space."

"This big volume is lit by a large window facing north, while polycarbonate cladding adds a certain vibrancy to the walls. It extends outside as an exterior plaza to host receptions or exhibit art pieces."

A single-height glazed exhibition area to the rear provides a living, meeting and events space that opens fully onto the central courtyard and to a terrace by the sprawling golf course behind.

Linking these two primary blocks is a small house-shaped volume with a sloping roof. Like the workshop, it is partially clad in sheets of crinkled polycarbonate that contrast with the opaque concrete and allow light to penetrate the plan.

Nearby, local studio BAST used panels of shiny corrugated steel to achieve the opposite effect in an extension for a derelict house.

The short linking block juts out to one side of the property and contains utility spaces including a kitchen and bathrooms.

"Each space aims to dispose of technical constraints to host diverse functions; specific and adaptive at the same time," said the architects.

"Rooms such as the bedrooms with bathrooms and offices do not readily identify themselves, but are rather characterised by their ambience and coherence with the project as a whole."

"The project displays a fluid spatiality evidenced by discrete openings and circulations routes, a concealed staircase, and windows that seem to fade to embrace the landscape better," added the studio.

PPA Architectures was founded in 2011 following the merger of Puig Pujol Architectures and Ping Pong Architectures. The studio is currently working with OMA on the Parc des Expositions – a 40,000-square-metre exhibition hall in Toulouse designed to resemble a miniature city and due to complete later this year.