As the house had none of its original interior features remaining, the architect chose to gut the property – removing existing walls to create more open living spaces. An extension was added at the rear, and the basement was enlarged.

"The courtyard garden was poorly connected to the rest of the house," Dusheiko told Dezeen. "The first floor had three small bedrooms and an internalised bathroom with no natural light. In the basement there was a single bedroom which was very dark and had a low ceiling height." 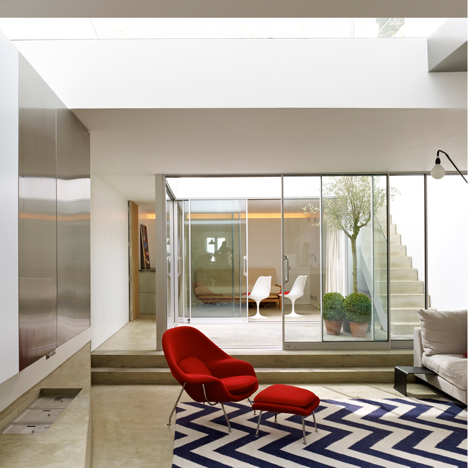 The extension is connected to the existing building with a curved brick wall. Inside, the ground floor was reconfigured to create an open-plan living, kitchen and dining space. Concertina glazed doors can be folded back in warmer months, opening the space to a small south-facing patio with a zigzagging fence.

A section of glass flooring running alongside the doors provides views into the cinema and playroom in the basement storey, as well as allowing natural light into the lower level.

"This works very well for the family as one can be cooking in the kitchen and have sight of people in the living room as well as in the playroom and cinema room downstairs," said the architect, whose previous projects include a north London house extension comprising shed-like blocks clad in unfinished larch.

"In addition to this we added lightwells on the street side to allow for additional light and cross ventilation in the basement," he said.

The architects designed the joinery for the media system in the cinema and playroom, which had to be able to be hidden away so that the space looks like a "normal room".

"The project had to provide for a cinema room and state of art sound system without having any of the gadgets being on display – so when not in use appears like a normal room," said Dusheiko. "The clients wanted a calm clutter-free atmosphere that was a restful place to be in."

To create the optimum conditions for film screenings, sliding fabric screens are concealed in a wall panel and can be used to divide the space from the playroom at the other end, blocking out light from the glass panel above.

The remainder of the basement level is occupied by a guest bedroom and bathroom, and a utility room that also houses mechanical plant equipment for the house. A heat exchanger in the utility room brings fresh air from the outside and heats it up using air extracted from the house.

"We recycled all the brick from the existing house for re-use internally, and used the thermal mass of the polished concrete floor along with the use of high levels of insulation to retain heat," added Dusheiko. "This, coupled with low energy LED lighting, reduces the energy consumption of the house."

Enlarging the basement to follow the building's footprint meant that the entire structure had to be supported on reinforced, underpinned concrete feet. Pumps also had to be installed to keep the new space dry.

The architects added 50 square metres to the house in total, taking its total floor area up to 177 square metres.

The basement rooms, kitchen and patio all share the same green-tinged polished-concrete flooring, chosen for its highly reflective qualities. The rest of the floors in the house are made from European engineered oak.

The upper level includes a master bedroom with an en-suite bathroom, a second bathroom and two more bedrooms.

"New windows are designed using the same dimensional ratios of the existing Victorian windows yet feature flush glazing allowing the geometry of the curved brick facade to read as a solid wrapped element linking old and new," said the architect.

All of the built-in bookcases, cupboards, desks and bathroom units were bespoke designs by the architects.