Business news: London designer Benjamin Hubert has relaunched his studio under a new name as part of a shift towards more "human-focused" projects, and is using "crowdspeaking" to drum up interest (+ interview).

Launching today, Layer will focus on the design of both physical and digital goods, including connected products and software.

This marks a significant change in direction for Hubert, who has previously created furniture and homeware for brands including Moroso, Ligne Roset and Menu.

"It's not that we're not turning our back on it, but we're just re-focusing a little bit," Hubert told Dezeen. "I think our responsibility is to use design for more than just the next nice chair."

The designer is set to work with global companies such as Nike, BMW, Samsung, Braun and Oral-B to create products that "use design for change in a meaningful way in terms of how people live now and next."

The first three projects will launch under the new brand over the next month. These include a collection box for UK cancer charity Maggie's, a conceptual smartphone application with Carbon Trust to raise awareness about climate change, and a modular acoustic system for creating flexible workspaces.

Also in the works is an app for Maggie's, signalling a move into more software and user experience design. 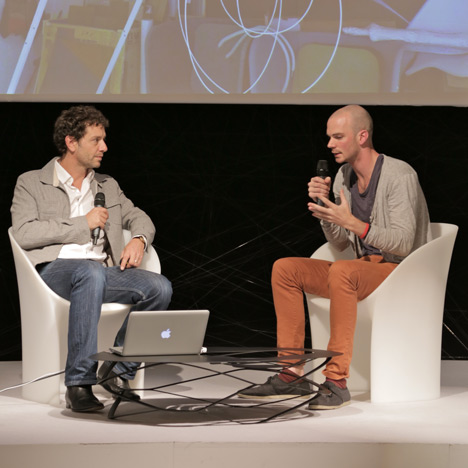 "I think we're still going to be developing a lot of hardware but the software side of things is something we're going to be increasingly focused on," said Hubert.

"Software is something that has a much smaller carbon footprint than producing more stuff that needs to go somewhere, then needs to be re-sold, re-made, re-used, recycled. Whereas, software is deleted and replaced," he continued. "I think it goes without saying it can be a much more powerful tool, but often in combination with a more analogue aspect."

Hubert plans to use "crowdspeaking" platform Thunderclap to generate interest in specific projects launched by Layer. Instead of offering money, like with crowdfunding platform Kickstarter, backers pledge their social media audiences to help spread the word about the projects. Once the campaign reaches is target audience number, the information is sent out from the backers' accounts on various platforms.

"We're going to be using Thunderclap to basically communicate to the crowd and get more people to talk about it, get more people on board, create enough momentum to then be able to take it to an investment level, to a governmental level," said Hubert.

Hubert set up his eponymous studio five years ago. His most recent products include ceramic containers patterned with raised seams, a sofa with legs tucked into the corner seams and blown-glass lamps with hand-cut patterns.

Home furnishings and accessories will continue to make up around 20 per cent of the studio's output, compared to the 80 per cent dedicated to projects that are more "necessary".

"What we want to do is a bit more democratic, a little bit more accessible and something that is tapping into what people need, not just what they want," Hubert said.

"There's lots of studios that I respect doing great work, but I've not really seen any evidence of somebody coming from this background of 'nice things' and moving into using design in a more necessary way."

Read an edited version of our interview with Benjamin Hubert:

Dan Howarth: What exactly is happening with your studio?

Benjamin Hubert: We're rebranding to Layer and it's not just a rebrand, it's a reposition. The type of work that we're doing in the studio now is much more human-focused.

So, whether it's a piece of consumer electronics, like how people watch TV or stream information, whether it's how you use a wheelchair or the stigma around a wheelchair, or if it's how you donate money or the perceptions around charities – the work is much more focused around using design for change in a meaningful way, in terms of how people live now and next and how it can be used as a tool for business as well.

This is much more of a holistic approach, whereas traditionally over the last five years under my name it's been largely a style-based approach, albeit with some depth – more or less – to some projects. But this is really much more of an experience-driven design consultancy and it really represents the work we're doing now and the work we're going to be doing in the years to come.

Dan Howarth: Will you still be doing this sort of style-based work alongside this?

Benjamin Hubert: I would say that the business is going to be sort of 80 per cent focused on delivering more meaningful experiences. Whether they're more necessary products or they're more powerful products of business, and 20 per cent of the kind of "nice things" – furniture, luxury, goods and that sort of thing.

We have some great projects coming out in that area with people like Fritz Hansen, and really big investments of core product for some of these bigger businesses in the luxury high-end sector. It's not that we're turning our back on it, but we're just re-focusing a little bit.

I think our responsibility is to use design for more than just the next nice chair, so the chairs and furniture that we're going to be doing will be fewer per year, but we hope better, and then the real focus is going to be using design as a more powerful tool.

Dan Howarth: Have noticed other companies and firms doing a similar thing?

Benjamin Hubert: There seems to be a bit more talk around the necessity of the high-end exhibition cycle that we go through every year. I've seen a few articles popping up about this kind of thing and a few documents being presented, and I see the talk but I don't see much action to be completely honest.

There's lots of studios that I respect doing great work, but I've not really seen any evidence of somebody coming from this background of "nice things" and moving into using design in a more necessary way.

Hella Jongerius obviously made comment on it, but there's no action around it. So, I think every designer, every critic, every journalist has a degree of frustration around just producing nice things. Even though there are lots of nice things being produced, there's not enough thought around doing one great thing which is better than everything else.

It's kind of a bit too "me too" and I think we're very much setting our stall out. Let's create a line in the sand and start saying now this is a project that is a much more powerful tool. Don't get me wrong, there are consultancies already doing this kind of work in a big way, but I think what's exciting for us is this change and jumping from one to the other.

Benjamin Hubert: I think you know we'll continue to talk through some of the channels we already talk through, in terms of this kind of interior lifestyle language. Even if we're presenting this really smart piece of technology that makes life easier – maybe you can communicate more readily, you know it uses less bandwidth, whatever it might be – it still has to be human, so there's still a language around it which is not dissimilar to how you perceive that chair in your house.

You still want it to be integrated, human, approachable, all of those things. It doesn't mean that tech needs to be tech-y. So, there is still a language that will continue. The business is growing a lot and I think the change is a vehicle to enable further growth, but it's actually there to more readily communicate what we do.

I think the difficulty when you have your name above the door, people think it's you and your taste and if you look at the industry, it is. I have a huge amount of respect for Jasper Morrison and people like that and I love his work, but it's a personal style-driven approach, whereas what we want to do is a bit more democratic, a little bit more accessible and something that is tapping into what people need not just what they want.

Dan Howarth: There's been a trend, particularly in the last couple of months, that some projects, similar to the ones you've been speaking about, have been crowdsourced. Is that something that you've thought about looking into?

Benjamin Hubert: I think crowdsourcing is great and it's definitely a sign of the times where, you know, people power is what is driving new products and services and I think there is no more democratic way to see if something is necessary than that route. We're open to it. We're not currently involved in projects around it, but our process is much more people-driven and I think that that's the most people-driven platform on the market at the moment.

Dan Howarth: Is there a sector that you're particularly interested in working in?

Benjamin Hubert: We're working in technology-based products and projects. The next project for Maggie's is potentially an application, which has some far-reaching benefits. I think we're still going to be developing a lot of hardware, but the software side of things is something we're going to be increasingly focused on.

Software is something that has a much smaller carbon footprint than producing more stuff that needs to go somewhere, then needs to be re-sold, re-made, re-used, recycled. Whereas, software is deleted and replaced. I think it goes without saying it can be a much more powerful tool, but often in combination with a more analogue aspect.

Dan Howarth: How are you going spread the word about Layer's projects?

The Phonebloks project raised a lot of interest using this and got a lot of people talking about it. It wasn't a fundable, ready product, but they had 300 million people using their social reach and talking about it.

One of the first things we want to be able to say that this many thousand or even million – if we ever get to that point – think it's interesting, think that it's something they want in their lives and then take that pack of information and go to the funding level.

It's really something which has come to the fore in the last year. There's a few cosmetics brands using it. The success of it long-term remains to be seen, but you know it's another one of these things which are really a sign of the times.