The folded concrete canopy of this burial service structure in an Israeli graveyard is supported by slender tree-shaped columns that pay homage to a razed orchard (+ slideshow).

Eulogies and final rituals are delivered below the concrete awning, which was designed by Studio for Design & Architecture Ron Shenkin for a plot on the edge of a cemetery in Pardesya, a town just north of Tel Aviv in Israel's Central District.

Over 300 thick concrete panels were fitted together to form the folded shape of the Open-sided Shelter, which is stabilised by a series of thin metal columns.

The white pillars branch out towards the roof to resemble the trunks of fruit trees that once surrounded the site, while leaf-shaped imprints mark the poured-concrete floor. 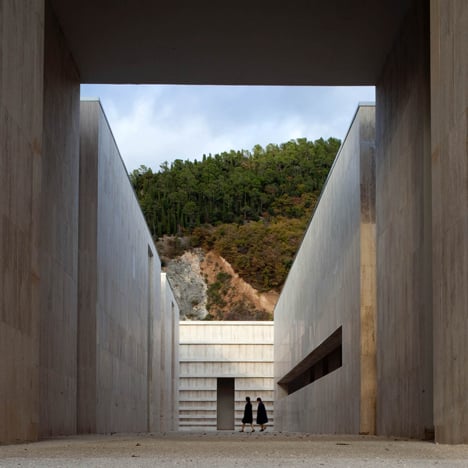 The old orchards were cleared away to make way for housing so the studio added these details as a reminder of the site's history.

"The area in which the structure is situated was surrounded by orchards which were originally raised to make space for new residential and commercial building projects," the team explained.

"During the design process we decided to take the surroundings into consideration by erecting a monument to the rural surroundings that were demolished for urban repurposing."

The monochromatic colour scheme of mottled concrete and white-painted metal was selected to give a sense of "cleanliness, neutrality and sadness".

The canopy bends down to touch the ground on two sides, while the others are left open to the elements.

The smaller of the two openings is designed as an entrance for the family of the deceased and is marked by a solitary oak tree, while the larger, open to the graveyard, provides a congregating space for mourners.

A similar open-sided pavilion made of red brick forms a secluded gathering spot outside the Woodland Crematorium near Stockholm.

Ivy trails through a narrow slit in one of the enclosing walls of Open-sided Shelter, allowing sunlight to stream into the interior. Here, small chunks of concrete are distributed to provide seating.

A broad flight of steps and gently sloping ramp lead down to the cemetery grounds from the elevated pavilion.

Photography is by Shai Epstein.