Described by the studio as "a condensed concrete spa", the Microtherme installation is on view in the Atlantic Wharf building, which sits adjacent to the headquarters for the Boston Society of Architects (BSA).

The structure is part of a BSA-curated exhibition called Bigger Than a Breadbox, Smaller Than a Building, which showcases 10 installations by local firms.

The Matter Design structure – created as a twist on a traditional sauna – consists of a birch plywood box measuring seven feet long, eight feet wide and seven feet high (2.1 metres by 2.4 metres by 2.1 metres). It is suspended from the ceiling by a beam.

Underneath, plush carpet invites visitors to "lay down and roll under the space," said firm partner Brandon Clifford.

There is a single hole on the side of the box, along with two holes on the bottom that are large enough for a human.

The interior features billowing concrete walls that radiate hot and cool air, creating an "intimate and contradictory set of experiences" inside, according to the designers.

"Upon approach, the occupant is confronted by a hovering wooden mass punctured by a singular and limited port, enticing curiosity about the interior," said the studio. "Once under the wooden mass, a concrete world is revealed and rendered elastically."

Occupants standing within the box appear to be "draped in a concrete fabric, producing the experience that the people themselves are supporting this engulfing mass," added the firm. 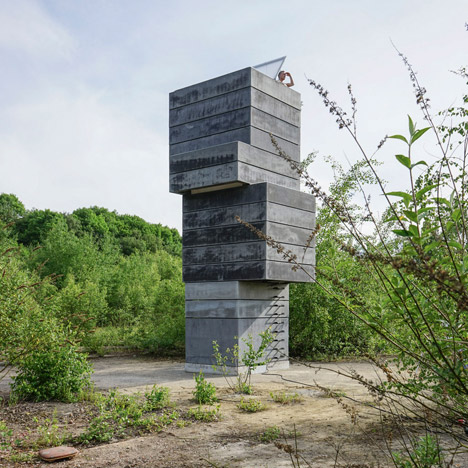 Modulorbeat creates One Man Sauna inside a stacked concrete tower

Composed of six distinct panels, the interior walls emit different temperatures. The upper portion produces a heat level one might feel while sunbathing, while the lower section is cold and is meant to evoke the feeling of swimming in a concrete bath.

"In the conception of the Roman bath complex, occupants move from extremity (caldarium) to extremity (frigidarium), managing their own thermal delight," said the firm.

"As opposed to a liquid bath, Microtherme is a radiant one that co-mingles extremities into singular thermal contradictions."

The studio produced the voluptuous forms by using a machined mould made of expanded polystyrene (EPS) foam. The foam mould was then coated in a water-based surfacing compound and cast with glass-fibre-reinforced concrete.

Copper tubes placed behind the walls enable hot and cool water to circulate through the structure.

"We have two systems: a heating system and a cooling system," explained Clifford. "With valves we can re-direct where the hot and cold water flow, but both of these systems are installed in the poche between the concrete shell and the wooden enclosure. This is not dissimilar to how a hot tub might be considered."

The installation is on view until 4 October 2015.

Matter Design is an interdisciplinary design practice founded in 2008 by Clifford and Wes McGee. The firm was awarded the 2013 Architectural League Prize for Young Architects + Designers.

Other recent projects in Boston include four installations created for the city's design biennial and an aerial rope sculpture by artist Janet Echelman.