This extension to a townhouse in the Dutch town of Vught by local studio Reset Architecture has a double-height window that provides views of the garden across two of the building's floors (+ slideshow).

Reset Architecture was tasked with modernising a townhouse from 1905 that was built with a main floor – or bel étage – raised a metre above street level, and a lower ground floor 2.6 metres below the street.

The dark, low-ceilinged basement level was previously used as a storage space, but the timber and glass annex now enables this space to accommodate rooms including a kitchen and dining area that opens onto the courtyard garden at the rear.

"By introducing a double-height open space next to the rear facade a renewed situation is created," said the architects in a statement. "In a logical way this space arranges unity; the bel étage and lower ground floor are interrelated and both are in direct contact with the garden." 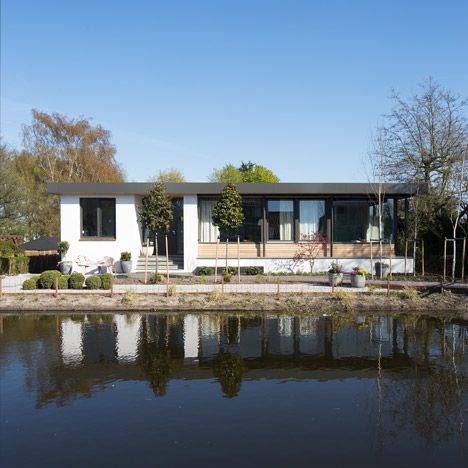 The extension replaces a cluster of redundant structures that were tacked onto the rear facade, with a simple contemporary box clad in timber and culminating in double-height steel-framed windows.

The large opening in the facade enables daylight to flood into the interior and allows some of the building's original features to be viewed from the garden –  a similar strategy was used by Space Group Architects when they added a modern extension to a protected 19th century London home.

"Synergy between old and new is created by sophisticated detailing and a transparent sight relationship through the annex," said the architects. "The use of black steel slim profiles in the interior and exterior frames intensifies the historic character of the residency."

The forms and materials chosen for the annex are intentionally modern to contrast with the brick building's more traditional details, including architrave mouldings, cornicing and doors inset with stained glass.

The void between the extension's rear elevation and the original facade contains a staircase made from folded steel that meets a timber stair ascending to a mezzanine.

The balustrade that extends along the edge of the mezzanine is made of thin steel with a dark finish that creates continuity with the window frames and horizontal timber shading slats on the exterior.

White-painted walls and a smooth grey floor combine with oak cabinetry to create a neutral yet comfortable feel inside the new rooms to complement the existing interior.

The surfaces produce gentle reflections to enhance the brightness of the spaces and contrast with the warm timber.

Other recent extension projects in the Netherlands include a double-height addition to a 1960s bungalow, and a gabled extension to a brick house that mimics the shape of the original property but is clad in an entirely different material.

Photography is by Stijn Poelstra.