A new exhibition at the Friedman Benda gallery in New York displays the early work of designer Ettore Sottsass, best-known for the colourful and radical Memphis design movement of the 1980s (+ slideshow).

The Ettore Sottsass: 1955-1969 show includes works in a variety of media, including furniture, lighting, mirrors, ceramics, and paintings. While the Memphis design movement of 1981 to 1987 used bright colours and manmade materials like plastics and laminates in pieces, such as for the Carlton bookcase, these earlier works are made of natural materials like rosewood, walnut, bronze, and terracotta.

The exhibition has many pieces for sale and several other works borrowed from private collections.

"This exhibit has been 10 years in the making, and many of the works have been chased down for years and were either custom-made or works Ettore had kept personally all his life," Marc Benda, owner of Friedman Benda, told Dezeen. "There has also never been so much of this early work available at a single time to the public."

The largest object is a one of a kind wall-mounted shelving unit with vertical bands of painted wood holding small shelves of various heights set against a warm wood backing. The piece was designed for a director of the Olivetti company, for which Sottsass served as a design consultant.

Many of the ceramic pieces are adorned with drip painting influenced by abstract expressionism, according to the gallery. The ceramics were also important medium for exploring forms and colour combinations, some of which would recur in later designs.

"He was prolific in his practice, usually ahead of his time and constantly reinterpreted design based on his life experiences and world travel," Benda said. 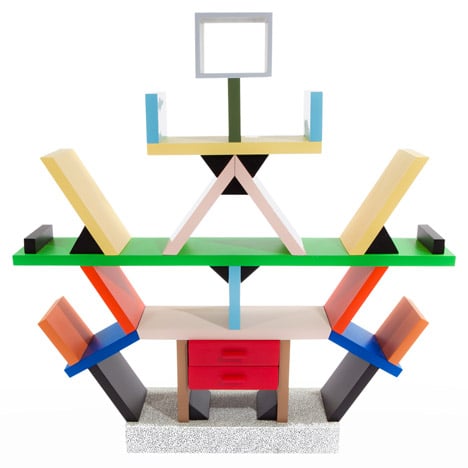 "I have tried ...to collect the shapes, colours and symbols that could represent the change in the images of this century from an intellectual organisation to a reality that must be lived, to a kind of pure and vital energy," Sottsass told Domus magazine in 1963.

A brightly upholstered sofa with blocky cushions, designed in 1965, shows Sottsass was already moving toward the vivid hues that would come to define Memphis.

Stripes and bands appear in many of the pieces, including sideboards, planters, tables, and vases.

The show runs until October 17 at the Friedman Benda gallery in New York's Chelsea gallery district.

The gallery has exhibited the designer's work from a number of periods in his nearly 60 year-long career, including a survey of the years 1992 to 2007 and the its inaugural show.

Sottsass, who died in 2007, has been an inspiration for many contemporary designs, including the Sass pedestals by MPGMB and a series of limited-edition vases by Studiopepe. Kartell also recently put a number of the designer's pieces into production for the first time.

Photography is courtesy of Friedman Benda and Ettore Sottsass Studio.

More about Ettore Sottsass and the Memphis group