Three designers from the Canadian firm Groupe A / Annexe U have erected an orange pavilion within a shallow pool, requiring visitors to don waterproof shoes to explore the structure's interior (+ slideshow).

Called Get Wet (The Soft Escape), the 24-square-metre installation consists of an irregularly shaped box placed in a shallow, rectangular pool of water.

Encircling the cube are angled poles topped with rain boots, which visitors are invited to wear as they explore the interior of the structure.

The concept was conceived by three designers from Groupe A / Annexe U: architects Remi Morency and Erick Rivard, both firm partners, and urban designer Jean-François Laroche, an intern.

The design is part of the International Garden Festival, held annually in the Reford Gardens in Grand-Métis, Quebec.

Now in its 16th year, the event presents temporary structures by architects, landscape architects, designers and artists from around the globe. Past installations include a large dish of water by Spanish architecture group Citylaboratory and stacks of decaying books by Rodney LaTourelle and Thilo Folkerts.

The schemes are chosen through a juried competition. This year's event drew 309 entries from a total of 34 countries.

The installations are erected next to a historic garden created in the 1920s by Elsie Reford, a pioneering Canadian horticulturalist. 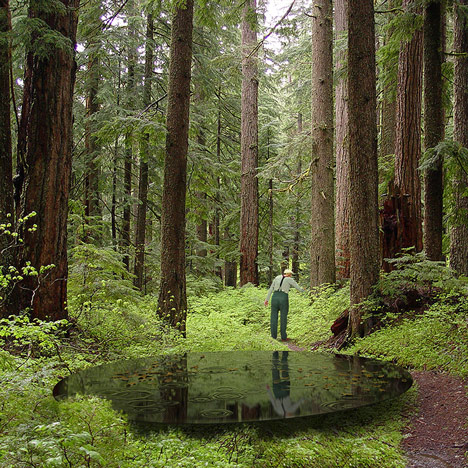 Rising 2.4 metres, the Get Wet box was constructed with white steel columns and two layers of translucent polycarbonate panels, each 10 millimetres thick. The inner layer was covered in orange vinyl, which gives the installation its colour.

The cubic volume consists of two overlapping, C-shaped walls and has openings on two sides.

"The idea was to create a maze-like path guiding the visitor into the discovery of a contrasting bright and colourful interior," said the design team.

The team placed floating, aquatic plants within the cube – with the goal to have the plants flourish and "escape" into the surrounding pool.

"The installation explores the discussion about invasive species and the delicate balance of ecosystems," said the designers.

Based in Quebec City, Groupe A / Annexe U is a multidisciplinary firm founded 60 years ago.

Other recent installations by architects and designers include a cabin on stilts in Latvia and a light arrangement that mimics the movement of fireflies, while an exhibition called Plants Out of Place is planned for the 2015 London Design Festival.