Groves Natcheva Architects have turned to movie making, setting a "dark and psychotically inventive" short film in an apartment they renovated to explore new ways of representing architecture beyond still images (+ movie).

Called Black Ice and due to be screened at the London Design Festival later this month, the movie is the first in a series that the studio is making to explore "a new mode of representation" of their discipline.

"Living inside a building is nothing like looking at a few pictures of one," Groves Natcheva Architects co-founder Adriana Natcheva told Dezeen. "That a new mode of representation is needed goes without saying: the question is what it should be."

She added: "Depicting bright, breezy building-scapes populated by animated mannequins is the answer now in vogue, but that seems to us to miss the point."

Brazilian architect Studio MK27 has also used film as a medium to present architecture, producing an architectural tour shown through the eyes of a cat and a movie that casts a modern house as a catalyst for the end of a marriage. 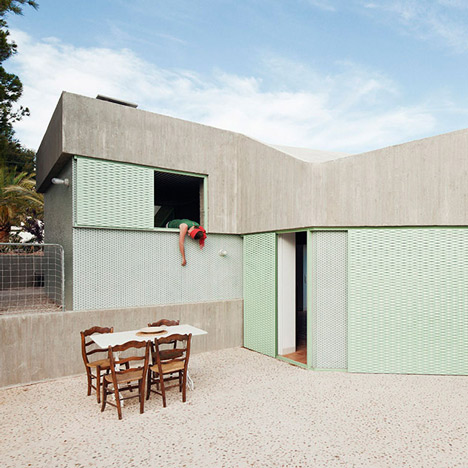 Black Ice is set in South Kensington mews apartment the architects renovated in 2010.

According to the architects, the 15-minute film is "as dark and psychotically inventive as the architecture of the house in which it is set" and tells the story of an affair, revenge and attempted murder.

"A building is like a stage," the architects wrote in a statement. "To show it without life is like showing a stage empty of the drama, raising the curtain only during the interval."

The statement continues: "Though architects cannot script people’s lives, they can imagine them enacted, in their full complexity, against the backdrop they have built for them."

Related story: architect murdered in his own building

"Instead of empty buildings or, worse, buildings decorated with the pseudo-life of static models, architecture studio Groves Natcheva is creating dramatic short films, shot on site in their built projects, to bring the spaces to life."

A blonde woman, credited as "the wife", goes to the property to accost a woman that has been sleeping with her husband.

Gun in hand, she threatens the mistress before sending her away so she can set about exacting revenge on her cheating partner.

With the backdrop of a crackling fire and the furniture used by the home's real owner, the character uses different rooms in the house while carrying out her plan.

She bakes a squid-ink gun in the kitchen, and uses shoe polish found in the bathroom to slick and darken her hair.

"Architecture stands to life as a theatrical stage stands to a play," said Natcheva. "A narrative takes you into the space without any need for abstractions."

The dark plot was chosen because the architects thought it would have more impact. Murder has previously been used as the theme for a student architecture project, while a concrete house by Langarita-Navarro was photographed as a crime scene.

"In drama, tragedy wins over comedy," said Natcheva. "This is not because tragedy is closer to reality but because it throws us harder. It is not a dour, stochastic, realism-for-its-own-sake we are after, but the rapid emotional arrest of the viewer."

Although hesitant to provide a list of references, Natcheva mentioned the painter Francis Bacon – a book of his work can be spotted on the coffee table – and the "black lacquer" of Modernist architect Eileen Gray as influences. She also described the film as a literal take on a lecture and text by late 19th century Austrian architect Adolf Loos' called Ornament and Crime, in which he attacked the use of ornament in design.

"We are not looking to wrap a film around an otherwise indigestible architectural message," Natcheva said. "We are trying to bring to the distant viewer the dimension that is missing from the bare surfaces alone — emotion — perceived as if one inhabited the space."

The film will be screened in a studio space on the same mews as the property to coincide with Open House London on 19 and 20 September 2015 and this year's London Design Festival, which takes place from 19 to 27 September. Viewers will also be able to take tours of the apartment to experience the space for themselves.