Glass boxes frame a tennis court, gym and pool set into the basement of this Mexico apartment building, which is formed from a series of stacked concrete blocks that cascade down a hill towards a wooded glen (+ slideshow).

To fit the hillside plot, the building was conceived as a series of stacked concrete blocks that descend the slope towards an area of woodland – a popular treatment for sloping sites, with recent examples including a house on a slope in the Rhine Valley and a submerged concrete home overlooking an Italian lake.

This arrangement diminishes the stature of the building from the street, giving it the appearance of a two-storey block. The uppermost storey overhangs the ground floor block and is punctured by a long panoramic window overlooking a water feature in the building's forecourt.

"The project is located in one of the most exclusive areas in Mexico City," said the architects, "flying over a glen, and structured one over the other to become a cascade of concrete elements." 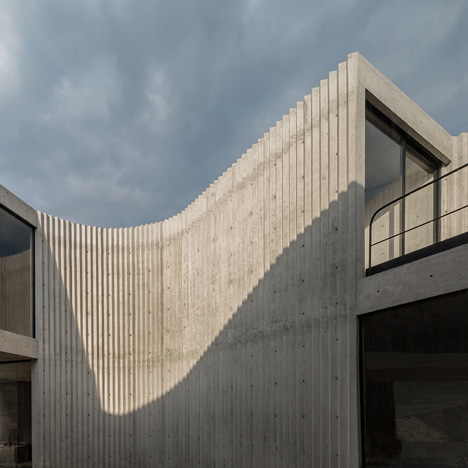 A pair of ramps lead down at the side of the building to a double-storey underground car park, while steps continue down to the private residences and glen.

The six apartments contained within the stepped blocks range between 400 and 1,200 square metres. Each has its own private entrance and a garden that occupies the roof of the apartment below.

"The principal challenge of the project is [keeping] the healthy distance of the owners to become not a simple apartment but a casa of their own," said the architects. "The concept has been very well received as the building is complete with six happy owners with low interaction."

Shared facilities including a pool, gym, tennis court and spa are set within glass boxes on the fifth basement level, which also provides access to the glen.

While the building has predominantly concrete finishings, the flooring within each of the glassed-in areas differs depending on its function – wood for the gym, grass for the courts and stone for the pool.

Residents can enjoy views of the secluded woodland through the glass walls that surround the pool, while a narrow border around the tennis courts provides a space to observe matches.

Nearby in Paseo de la Reformas Mexican architect Fernando Romero – who is also responsible for the city's anvil-shaped museum of Latin American art – is developing a public park above a 10-lane road.

Romero is also working with Norman Foster on a new international airport on the outskirts of the city. According to the project team, its lightweight glass and steel structure, which will feature spans of over 100 metres to create a vaulted roof, will be "like nothing else in the world".