News: Norman Foster and Mexican architect Fernando Romero have won a competition to design one of the biggest airports on earth for Mexico City, which the British architect says will be "like nothing else in the world".

Just two days after Foster's vision for a London estuary airport was ruled out, the Stansted Airport designer has unveiled his firm's competition-winning design for the new international airport in Mexico City.

Foster + Partners worked in partnership with Fernando Romero Enterprise (FR-EE), the team behind the city's anvil-shaped Museo Soumaya, to develop a lightweight gridshell structure that will form the walls and roof of the 555,000-square-metre terminal.

Despite this size, the plans comprise a single terminal serving six runways, which the team says will use significantly less energy and will allow it to become the most sustainable airport in the world. 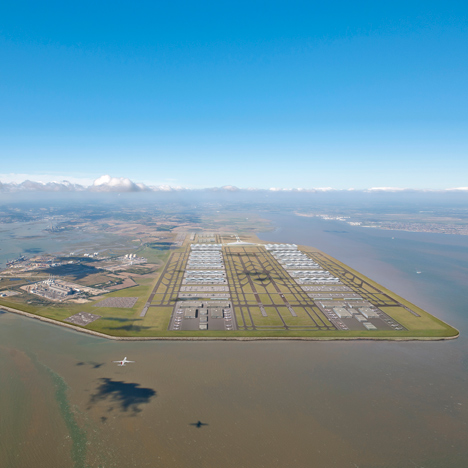 The lightweight glass and steel structure will feature spans of over 100 metres, creating a vaulted roof intended to make reference to traditional Mexican architecture and symbolism.

"Stansted Airport's reinvention of the conventional terminal in the 1990s was emulated worldwide – this breaks with that model for the first time," said Foster, whose firm also has completed airports in Beijing, Hong Kong and Jordan.

"It pioneers a new concept for a large-span, single airport enclosure, which will achieve new levels of efficiency and flexibility – and it will be beautiful. The experience for passengers will be unique. Its design provides the most flexible enclosure possible to accommodate internal change and an increase in capacity," he said.

The design anticipates the predicted increase in passenger numbers up to 2028. A pre-fabricated construction system will allow the airport to be built quickly, without any need for scaffolding.

"Mexico has really seized the initiative in investing in its national airport, understanding its social and economic importance and planning for the future," said Foster. "There will be nothing else like it in the world."

For most of the year, comfortable indoor temperatures will be maintained using natural ventilation, with little or no additional heating or cooling required.

Solar power and rainwater harvesting will also be used to reduce the building's carbon footprint.

More from Foster + Partners and FR-EE