Named A Bullet From A Shooting Star, the semi-permanent installation by London-based sculptor Alex Chinneck takes its cues from the industrial structures around the River Thames in London. The huge structure leans at an angle and is designed to look like its been shot into the earth.

Chinneck, who specialises in architectural installations featuring optical illusions, was also the artist behind a house in Margate with a slumping brick facade and a levitating building in Covent Garden's Piazza.

His latest 35-metre-tall sculpture, which is embedded in a pit of gravel on the Greenwich Peninsula in south-east London, is among the highlights of this year's London Design Festival selected by Dezeen design editor Dan Howarth.

"It's an extremely peculiar and rare plot of land and it offered this incredible platform for sculptural ambition," Chinneck told Dezeen at a preview of the installation earlier today. 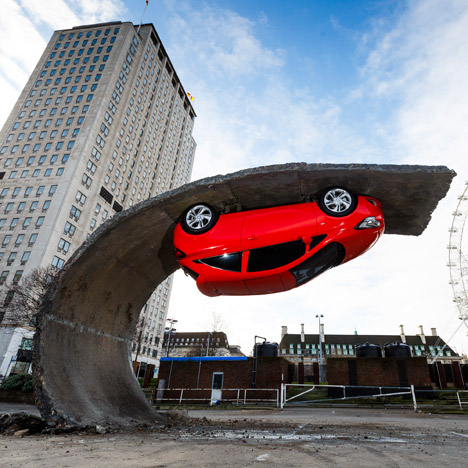 "You can't dig 25-metre-deep foundations and pour 420 tonnes of concrete in Covent Garden Piazza so in many ways it was very liberating, but it was also a curse because the devil in me set an incredible challenge," added Chinneck.

Over 1180 metres of steel were used to create the latticed structure, which weighs 15 tonnes and sits on foundations dug 25 metres into the ground. A 120 tonne counterweight – similar to that used to ballast his Covent Garden installation last year – allows the sculpture to appear to balance on its very narrow tip.

Its positioning on the edge of the River Thames in Greenwich means the sculpture sits against a backdrop of London's iconic Millennium Dome and the remains of the latticed towers that once formed Europe's largest gas-works.

"Like all my work it was a contextual response," said Chinneck. "The backdrop is incredible, it has this visual material language of latticed steel, and that latticed steel and language of cables which is also on the [Millennium dome] and the leaning steel elements."

"It has this rich history of power generation and supply and so it was thinking about the latticed steel and this history that led to me to electricity pylons," he added.

The installation occupies an empty plot on the Greenwich Peninsula, which will be redeveloped over the course of the next 20 years to provide 15,000 new homes.

While the compound the sculpture stands in will be locked following the end of the London Design Festival on 27 September, a wide tarmac path around its outskirts is intended to allow visitors to see the changing latticed shadows the structure casts on its surroundings until it is removed for the site's development.

"You have the water there and its not particularly interrupted by any surrounding buildings. Its some of the best light you can see in London and it silhouettes absolutely everything in its path," said the artist.

Illuminated at night, it will also create a beacon for passing cars on the nearby A12 road and for planes passing overhead on their arrival to and from the City Airport, as well as the Emirates cable car that links both banks of the River Thames and passing boat services.

A sister installation – a 20-metre-long coiled pylon – will be on display at the nearby NOW Gallery from 19 September until 10 January 2016.

Throughout London Design Festival we will be re-gramming our favourite behind-the-scenes and visitor images from the official #LDF15 tag.

Photography is by Chris Tubbs, unless otherwise stated.