British architect David Adjaye has revealed plans for a museum in San Antonio, Texas, with a red concrete skin based on a dream of its patron, philanthropist Linda Pace.

The distinctive facades of the two-storey, 14,000-square-foot (4,267-square-meters) contemporary art museum for the Linda Pace Foundation will be made of crimson precast panels flecked with glass aggregate. The panels will vary in shades of red, and are intended to make the largely opaque structure less monolithic.

The jagged roofline will be punctuated with skylights, while strategically placed large windows will offer views out to a park and San Pedro Creek.

The late Linda Pace – an artist, art collector, and philanthropist – saw a red building in her sleep and made a sketch of it that she presented to Adjaye, which became the guiding idea behind her namesake collection's new home, called Ruby City.

"When I visited San Antonio in 2007, and met with Linda, we sketched out ideas and together we envisioned a building that would resonate with her dream of the Ruby City," Adjaye said. 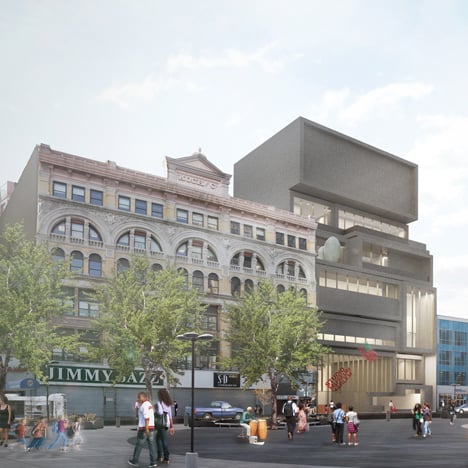 "Like a city, the design offers an organic, heuristic encounter with the Foundation's works and my hope is that it will become a place where artists and the wider community can be inspired to realise their own dreams through a meaningful experience with contemporary art," he added.

Due to open in 2018, Adjaye's building will anchor a new cultural campus built by the artist's trust, including CHRISpark, a one acre (0.4 hectare) green space named after her late son, an outdoor sculpture garden, and the Linda Pace Foundation gallery, which hosts traveling exhibitions.

The more than 800 piece Linda Pace collection includes works by Thomas Demand, Teresita Fernadez, Olafur Eliasson, and Antony Gormley. The building is expected to cost $16 million (£10.03 million) and is being funded by the foundation.

Adjaye is currently working on a number of projects in the US, including an expansion of the Studio Museum of Harlem in New York and the National Museum of African American Culture and History in Washington, DC.

He has also been hotly tipped for the job of designing President Obama's official library in Chicago.

Prominent architects currently working in Texas include Steven Holl, who is expanding the Museum of Fine Arts in Houston, and Kengo Kuma, the designer of a new tower for Rolex in Dallas.