A long strip of glazing runs along the front of this cantilevered Spanish house by Alventosa Morell Arquitectes, giving the two siblings who inhabit it views of a mountain range near Barcelona (+ slideshow).

The two sisters commissioned Barcelona studio Alventosa Morell Arquitectes to design the timber house named Casa LLP, which looks out over the Collserola mountains from its hillside plot.

The summit of the mountain range near Barcelona is marked by a communications tower designed by the British architect Norman Foster.

Just two retaining walls were built on the sloping site to support the lightweight wooden structure, which cantilevers over the lower of the two concrete walls.

A bioclimatic study of the site was carried out to inform the design of the house, which uses natural heating and cool-air systems.

The house is book-ened by a pair of decked patios. It also features a long balcony on its cantilevered facade and a ramped observation deck containing clerestory windows on the green roof.

As well as providing ventilation for the building, these features are all designed to allow the residents to take in views of the verdant mountain range.

"This building has been designed after the request of two sisters for a bioclimatic house, where they could live together and independently at the same time," said the architects. 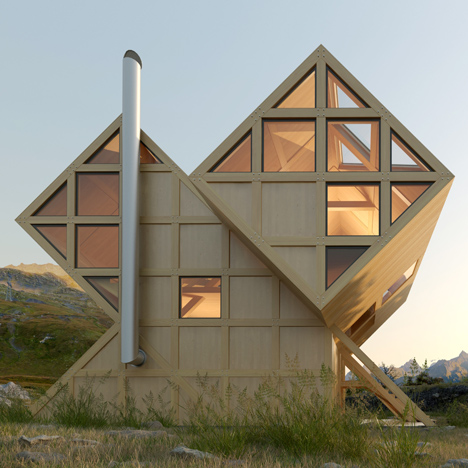 Plan Bureau imagines a twin-peaked wooden house in the mountains

"After the bioclimatic study of this exact point we decided the strategies of the project, in order to maximise the environmental and thermal performance, and to follow the equivalent demands to create a passive house."

The glazed southern facade and rooflights help to capture heat and light from the sun during winter months, while the green roof and wooden facade retain the warmth.

These contributed to the building's low energy consumption for heating, which is just 9 kilowatt-hours per square metre – exceeding the energy efficiency required to receive Passivhaus low-energy certification.

A growing number of buildings are being constructed to consume little energy and even produce more power than they use. Among them is a prefabricated timber house in Melbourne and a row of townhouses in Boston that allow residents to sell surplus energy back to the grid.

"We improve the comfort of the building by compaction, capture and sun protection, thermal resistance and cross ventilation," explained the architects.

"The demand on heating has been under the limits of a Passivhaus (15 Kwh/m2a), and it has been solved with just a fire place for each person."

White boxes wedged between the bare timber floorboards and exposed rafters define identical suites of rooms for the two sisters within the house.

Each of the the siblings has her own sitting room with a fireplace and access to the balcony, kitchen and bedroom.

"The framing walls organise the different spaces of the house with the idea that each woman could have two rooms, a dining and a sitting room, a bathroom, a kitchen and a terrace to implement the main rooms," explained the architects.