Architects Lluís Corbella and Marc Mazeres have converted a former dairy in Barcelona into a loft-style house featuring a suspended walkway and glass walls (+ slideshow).

The building located in Barcelona's Gracia district was constructed in 1934 and comprised a barn and an adjacent shop selling products made using milk from cows that lived on site.

The dairy ceased activity in 1984 following the introduction of legislation that outlawed the presence of livestock in the inner city, although the shop remained.

The dairy gradually fell into a state of disrepair, until French architect Marc Mazeres purchased it and asked local architect Lluís Corbella to help him fulfil his vision of converting it into a home for his family.

Extensive renovations were required to stabilise the structure, whilst ensuring the original facades and roof could be retained. The interior was completely gutted, but a brick pillar at the centre that supports the roof was kept and restored.

"The preservation of the original features has always been an important part of the new project," Corbella told Dezeen. "We tried to free these elements visually to give them an important presence in the project."

Within the cavernous space created by removing the existing first floor, the architects inserted metal beams and concrete slabs to support new volumes that form a series of interconnected rooms.

"We wanted to turn the building into a family home with three distinct spaces, lots of natural light, large volumes and huge openings," Corbella explained. "The aim was to create one space for the three teenage sons, one for the parents and a third one being the link between parents and children." 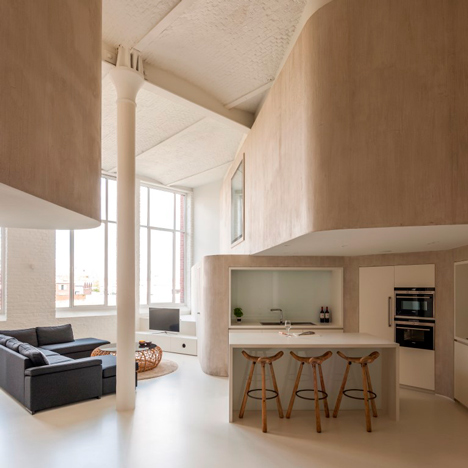 Voids between the various additions ensure the central area is visually and physically connected to the rest of the house, whilst helping to retain a sense of the building's original proportions.

The brick column and the timber beam that extends from either side of it dominate the main living area, where some of the original ceiling beams were also reused.

Large windows fill the central space with natural light, which is able to reach other parts of the house thanks to the double-height atrium and glazed internal partitions. The ground-floor windows open onto a walled terrace incorporating a small pool and outdoor dining area.

The interior features numerous items aimed at creating a fun and lively environment for the family's sons. A hanging chair is suspended from one of the wooden ceiling beams and an old pinball machine stands beside the brick pillar.

A table-tennis table is located on a decked roof overlooking the surrounding rooftops, which can be reached by ascending a folded metal staircase.

Other agricultural buildings that have been converted for residential use include an old cattle shed in the Slovenian Alps that is now a two-storey holiday cabin and a barn in England with a loft bedroom accessible from a staircase hidden behind a cupboard door.

Photography is by Lluís Corbella and Eva Cotman.